Second-year pros starting at quarterback, running back and wide receiver.

No, we’re not describing a preseason game. This was regular-season reality Monday night for the typically veteran-laden New England Patriots, who placed more than a half-dozen first- or second-year players in prominent positions during their 26-10 loss to the Kansas City Chiefs at Arrowhead Stadium.

Here’s a look at how they fared:

— Running back Damien Harris (2019, third round) was a clear standout, rushing for an even 100 yards on 17 carries in what essentially was his NFL debut. (The Alabama product played just 10 snaps as a rookie and spend the first three weeks of this season on injured reserve.) His 41-yard gallop in the fourth quarter set up the Patriots’ first and only touchdown.

With Sony Michel now on IR, expect Harris to be New England’s lead back moving forward.

— Outside linebacker Chase Winovich (2019, third round) was another stud. He continued his sensational sophomore start, delivering the Patriots’ lone sack — on a controversial play that should have resulted in a fumble or interception — and adding two tackles for loss.

Winovich has been arguably the Patriots’ best defensive player through four weeks and, according to several advanced metrics, one of the NFL’s top edge rushers.

— Quarterback Jarrett Stidham (2019, fourth round) showed enough in relief of Brian Hoyer to warrant starting consideration until Cam Newton returns from the reserve/COVID-19, but he was far from perfect.

… Stidham effectively ended the Patriots’ comeback bid with an underthrow to Damiere Byrd that was intercepted near the goal line.

Those plays were sandwiched around a pick-six, but that interception wasn’t on Stidham. It clanged off Julian Edelman’s hands before bouncing straight to safety Tyrann Mathieu.

Stidham, a healthy scratch in Weeks 1 through 3, played the Patriots’ final four possessions, completing 5 of 13 passes for 60 yards with one touchdown and two picks. Hoyer went 15-for-24 for 130 yards with one interception and two costly game-management gaffes.

— Speaking of Harry (2019, first round), the wideout was quiet outside of his touchdown, finishing with three catches on six targets for a season-low 21 yards. He also drew a defensive pass interference penalty that set up his score.

Receivers Gunner Olszewski (2019 UDFA) and Isaiah Zuber (2020 UDFA) each had one touch in the loss, with the former also stepping back into his role as New England’s primary punt returner upon his return from IR.

— Over on defense, either Joejuan Williams (2019, second round) or Kyle Dugger (2020, second round) matched up against Kelce on all but one of Kansas City’s third downs. The star tight end finished with just three catches, but he beat Williams for a 45-yard gain late in the third quarter and drew a defensive pass interference call against Dugger on third down on the ensuing drive. Both plays led to Chiefs touchdowns.

— Linebacker Anfernee Jennings (2020, third round) set a new career high with 14 defensive snaps (25 percent) after sitting out last week as a healthy scratch. His pressure off the edge helped force a red-zone incompletion on the game’s opening drive.

— The two young players who saw the largest workloads were offensive linemen Mike Onwenu (2020, sixth round) and Justin Herron (2020, sixth round), both of whom played wire to wire for a unit that was without three of its usual starters.

Onwenu started at right guard — his fourth position since joining Patriots, including jumbo tight end — in place of an injured Shaq Mason, and Herron got the nod at right tackle as a last-second replacement for Jermaine Eluemunor, who sat out with a migraine. Harris ran behind the two rookies on his 41-yarder.

Onwenu, who, despite his draft slot, has been one of the NFL’s highest-performing rookies this season, also decked a linebacker on a big gain by Rex Burkhead.

Herron allowed the sack that forced Hoyer’s red-zone fumble, but that had more to do with poor pocket awareness than shoddy blocking. In fact, both of the sacks New England surrendered could be blamed on Hoyer, who was benched late in the third quarter.

Overall, it was a solid showing for Onwenu and Herron, who helped New England pile up 185 rushing yards and average 5.3 per carry (albeit against a lackluster Chiefs front that was missing star defensive tackle Chris Jones). 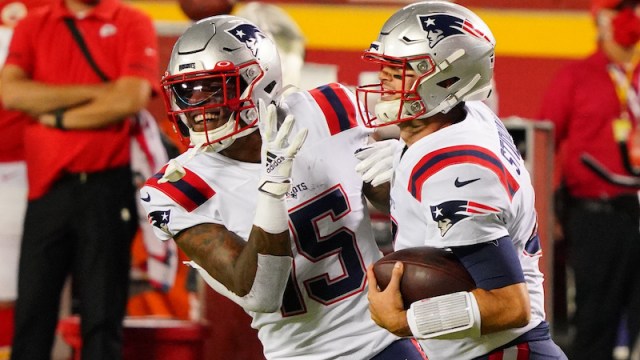 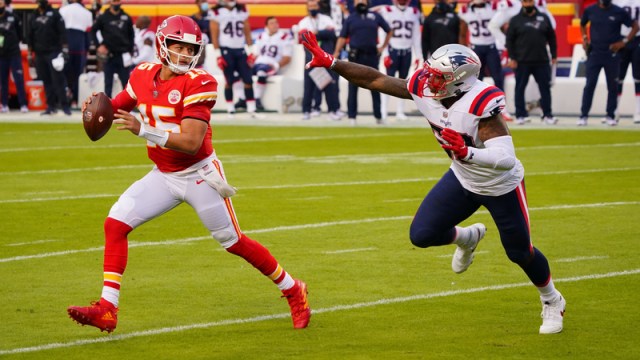