To say the fourth line was buzzing Thursday night would be an understatement.

The trio of Anders Bjork, Sean Kuraly and Chris Wagner combined for three points in the Boston Bruins’ 4-1 win over the Pittsburgh Penguins at TD Garden.

Wagner got the scoring started for the B’s, and Kuraly added a goal of his own after a beautiful sequence by Bjork to rush up the ice, behind the net and back to the top of the face-off circles before firing the puck on net.

Bjork arguably played his best game of the season Thursday, something he desperately needed these past few contests.

“I was pumping his tires the past two weeks,” Wagner joked after the game.

But Bjork said he wasn’t happy with how he was playing of late, and knew he had to make a change. The Notre Dame product added he has been working hard to grow his game, and head coach Bruce Cassidy took notice.

“I thought Anders was real good tonight,” he said.

Cassidy also had high praise for the fourth line in general.

“They bring energy,” he said. “I was happy for them. They?re well-liked in the room. When those guys score it always lifts the bench.”

Here are some other notes from Thursday’s Bruins-Penguins game:

— Matt Grzelcyk did not return to the bench for the third period, and Cassidy provided a bit of a discouraging update on the defenseman after the game.

“It was a different injury, lower body. Tough start for Grizz,” Cassidy said. “I don?t think he?ll be available for Saturday. It looks like it might be a few days anyway, so we?ll see. We?ll probably have a much better idea tomorrow or Saturday morning when it calms down a bit.”

— Before Wagner answered questions, he expressed his support for A.J. Quetta, the Bishop Feehan High School hockey player who was seriously injured this week.

“We’re all praying for A.J. It’s way bigger than hockey,” he said. “Our whole team is thinking about him. It makes you think how fragile our careers are and how fragile life is

— The Bruins were 3-0-0 this season when scoring first heading into Thursday’s game. And now they’re 4-0-0 and remain undefeated at TD Garden.

— Charlie McAvoy extended his point streak to three games with an assist.

— Kuraly may have scored his first goal of the season, but he wasn’t quite sure he really wanted it to be credited to him.

“It was an ugly one,” he joked. “I didn’t even know if I wanted to take credit for that one.”

— Patrice Bergeron had himself a two-point night with two goals in the win.

— The Bruins now get set to face the Washington Capitals on Saturday. It will be the first time the Black and Gold will face Zdeno Chara. 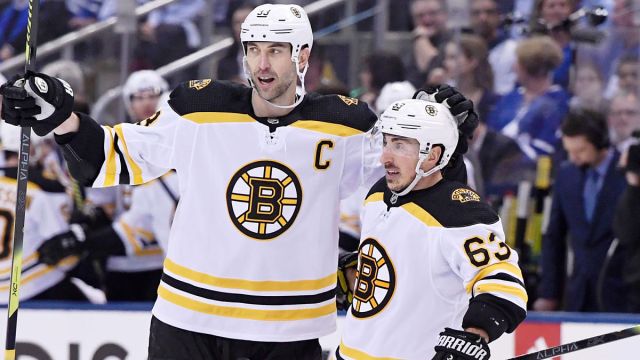 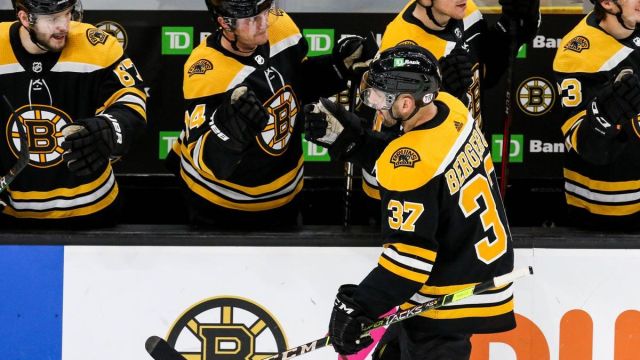