Tampa Bay Buccaneers quarterback Tom Brady has been teammates with Rob Gronkowski for so long, he can read the tight end’s mind.

That’s what Brady said Thursday when discussing pre-snap and non-verbal communication with his teammates, new and old, on the Bucs.

“I think we’ve certainly come a long way,” Brady said. “I think we’re just going to keep improving. The more we’re together, the more we’re talking about football, the more we’re trying to be on the same page, the better it is. It’s a complex game — there’s a lot of moving parts (and) there’s a lot of coordination involved between a lot of different positions. I think the quarterback-receiver relationship is really important. The more that I’ve been around Mike (Evans), Chris (Godwin), Antonio (Brown), ‘Scooter’ (Scotty Miller), Tyler (Johnson), ‘Mick’ (Jaydon Mickens) — the better it gets. The tight end position, I’ve been around Gronk (Rob Gronkowski) for a long time — I know exactly what he’s thinking (and) how he looks.”

That seems pretty easy, actually, though we’re not sure if we’d want to go there. It’s probably just an endless stream of jokes about a certain number.

“Cam (Brate) is a pretty easy guy to get up to speed with, too,” Brady continued. “We’re just going to keep trying to make improvements. We’ve got a big test this weekend (against) one of the great teams in the NFL (who has) consistently been one of the great teams for a long time. We’re going to have to go play a great football game.”

The Buccaneers take on the New Orleans Saints on Sunday at 6:40 p.m. ET in the divisional round of the playoffs. Brady’s Buccaneers beat the Washington Football Team in the Wild Card round Saturday to move on in the postseason. 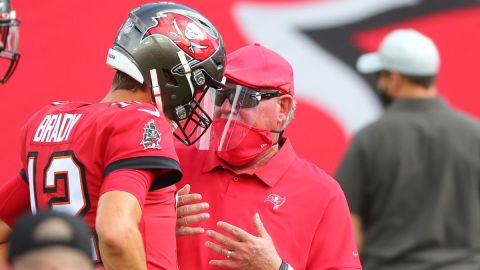