But for a player who is still trying to find his way in the NHL, a trade to the Buffalo Sabres might represent the perfect opportunity.

He sure thinks so.

“I was excited, for sure,” Bjork said Tuesday morning on a Zoom call with reporters. “There’s opportunity. It’s a fresh start for me. I don’t think my time in the NHL has gone the way I wanted it, but this is a great opportunity for me to start over and begin working even harder to become the player I believe I can be.”

Bjork was the lone player leaving the Bruins organization in the trade with the Buffalo Sabres, which brought Taylor Hall and Curtis Lazar to Boston.

Once in the top 10 for the Hobey Baker while playing at Notre Dame, Bjork, now 24, had a bumpy run with the Bruins.

Injuries marred a few opportunities for him to stick at the NHL level. He clearly was more comfortable playing on his left side than the right, but too often his only opportunities with the varsity would be if he played on the right.

The Bruins asked him to get stronger and become a better defensive player. He did both those things. But, ultimately, the scoring touch he showed in college never came around as much as it needed to, and he was periodically healthy scratched.

“I’ve had injuries, which has kept me out of the lineup, and struggled to get back in at times. Haven’t really established myself, I think,” Bjork said. “I’ve played a handful of games, but I haven’t become the player — I don’t think I have my identity set yet. That’s something that excites me, I’m looking forward to establishing that and building my game. … This is a great place for me.”

There is plenty of familiarity for Bjork, who will wear No. 96 with the Sabres, upon his arrival in Buffalo.

Sabres’ interim head coach Don Granato was on the coaching staff for the United States National Team Development Program when Bjork was there, and the winger’s time with the USNTDP overlapped with star Sabres center Jack Eichel.

“We didn’t have much contact because (Granato) coached the odd birth year, and I’m even. But I remember that the players loved him and really respected him and wanted to play well for him. I got that same sense in the short time I’ve been here.”

Bjork played pretty much everywhere up front on the Bruins: Left and right wings, first through fourth lines. He’ll start his Buffalo career on the third line left wing with Dylan Cozens as the center and Arttu Ruotsalainen on the right.

And, coincidentally, his first game will come against his former team, as the Sabres face the Bruins on Tuesday night at TD Garden.

Bjork didn’t even need to leave his apartment, he just met up with his new team in Boston, taking part in morning skate on Causeway Street, albeit in blue and yellow.

“It’s been a little bit of a whirlwind, but I’m really excited,” Bjork said. “It’s cool to be playing against the guys I was just teammates with right away. Get right to it, so I’m excited about that.”

Bruce Cassidy had nothing but good things to say about Bjork, and it sound like there are no hard feelings on either side about how Bjork’s Boston tenure played out.

Puck drop for Bruins-Sabres is set for 7 p.m. ET, with pregame coverage beginning at 6 p.m. on NESN. 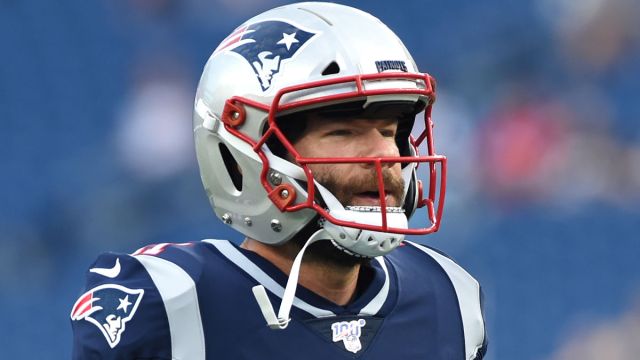