Mac Jones Takeaways: What Patriots Are Getting In First-Round QB Skip to content

The first round of the 2021 NFL Draft broke perfectly for the New England Patriots, with Alabama quarterback Mac Jones sliding all the way to them at No. 15 overall.

Jones has been described as an excellent fit for New England’s offense. What are the Patriots getting in the 22-year-old signal-caller? We reviewed film from Jones’ superb 2020 season to find out.

— Jones’ greatest asset is his accuracy. He completed a remarkable 77.4 percent of his passes last season, breaking Colt McCoy’s NCAA record of 76.7 percent. He also led the nation in Pro Football Focus’s adjusted completion percentage (84.2 percent), which removes drops, throwaways, spikes, passes batted at the line and passes thrown while the quarterback was being hit.

Can’t get much better than that.

— One of the biggest knocks on Jones is his lack of elite arm strength, and we spotted a number of instances of him either underthrowing or overthrowing long passes to wide receivers. Overall, though, Jones was phenomenally productive on deep balls, going 33-for-56 with 17 touchdowns and four drops, per PFF. He also completed 71.3 percent of his passes between 10 and 19 yards downfield (72 of 101), posting a near-perfect 149.0 passer rating on those throws.

— Another concern about Jones’ NFL potential is how he’ll fare in an offense that isn’t obscenely loaded with talent at nearly every position.

Four of Jones’ offensive teammates (Waddle, Smith, running back Najee Harris and offensive tackle Alex Leatherwood) went in the first round two weeks ago. Another (center Landon Dickerson) came off the board early in the second. Metchie might be a first-round pick next year.

Waddle, Metchie and especially Smith were godsends for Jones, who only worried about putting the ball in the same zip code as his superstar wideouts. Some of Smith’s touchdown receptions were flat-out ridiculous.

Alabama’s offense also was piloted by one of college football’s most innovative play-callers in Steve Sarkisian, whom Texas hired as head coach in January. With Sarkisian’s scheme amplifying the talents of the Crimson Tide’s stud pass-catchers, Jones regularly had the luxury of hurling passes to wide-open receivers — all while playing behind an offensive line that allowed him to be sacked just 10 times in 12 games.

That scheme leaned heavily on screens, too. Jones ranked second in the FBS in yards off screen passes, per PFF, and 52.2 percent of his 4,500 passing yards came after the catch.

These factors don’t erase Jones’ talents. It still takes a smart, responsible, efficient quarterback to get the most out of the players around him, regardless of how skilled those players are. Both things can be true: Jones played with very good teammates and also is very good himself. But if he’s asked to elevate a less talented roster at the NFL, can he do it? That’s a legitimate question.

— Jones rarely makes mistakes, throwing just four interceptions on 402 pass attempts last season. He had a few more would-be picks that were dropped or wiped out by penalties, but PFF credited him with a mere eight turnover-worthy plays on 428 dropbacks, the 17th-best rate among FBS quarterbacks.

— Much has been made of Jones’ lack of top-end athleticism compared to this year’s other leading QB prospects, and no, he’s not going to be running a Cam Newton-style offense filled with designed quarterback runs. He rushed for just 14 yards last season. How offensive coordinator Josh McDaniels works to bring the rookie along while also continuing to run a system that maximizes current starter Newton’s strengths will be one of the many intriguing Jones-related storylines to follow in the coming months.

Jones isn’t a total statue, though. He tested reasonably well at his pro day (80th percentile in the broad jump, 65th in the three-cone drill, 45th in the 40) and while he doesn’t offer much as an out-of-structure creator, he is adept at moving within the pocket and throwing on the move.

Jones also showed good toughness in the rare instances where he was pressured, absorbing hits on several of his touchdown passes.

— The Patriots like players who perform at their best in big games. Across the SEC Championship, College Football Playoff semifinal and CFP final, Jones completed 79.7 percent of his passes, threw 14 touchdown passes with one interception and averaged 10.0 yards per attempt.

— Alabama’s offense featured very little under-center work for Jones, so that’ll be a necessary adjustment as he transitions to the pros. The Patriots operate out of the shotgun or pistol less frequently than many NFL teams.

Jones did play under center often as a high schooler at The Bolles School, though, so he has plenty of experience in that area. 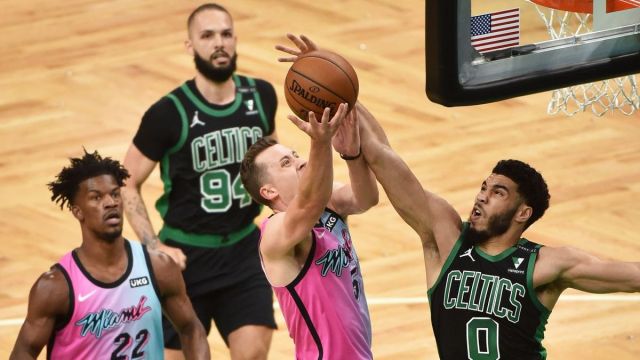