BOSTON — The Bruins ultimately did not receive the end result they were looking for Saturday with a 3-2 overtime loss to the defending Stanley Cup champion Tampa Bay Lightning, but a theme from both players and acting head coach Joe Sacco was that it was an effort they can build on.

“Absolutely,” said Sacco, who has stepped in with head coach Bruce Cassidy in COVID-19 protocols. “I think our guys played real well tonight. You know, especially being down 2-0 to that team, but even when we were down 2-0 we were playing a good, solid game.

“We played hard tonight. We competed. Nobody really took the night off,” Sacco continued. “We had everybody on board, and it was it was good to see. Unfortunately, we don’t get the end result, the extra point, but we can build off that game for sure.”

Charlie Coyle, who scored the first goal of the game for Boston to cut the deficit to 2-1 in the middle period, said much of the same. It was especially true seeing as though Boston was without Charlie McAvoy, Brad Marchand, among others.

“You want to get every point you can,” Coyle said. “You work back from a couple goals to gain one (point), that’s huge down the road. Of course, we wanted to finish it off. We had some opportunities and we didn’t. … On one side of it, I think it’s good to claw back and work and and grab that point, but there’s also things we can work on when you don’t win a game. We can look at that, come back and get better from it.”

Curtis Lazar added: “Getting that point is big. Obviously, we would’ve liked two. But I thought. the. ups and downs, we kept on fighting. We played a lot of good hockey out there.”

Here are some other notes from Bruins-Lightning:

— Tampa Bay netminder Andrei Vasilevskiy was exceptional in the winning effort. He saved 37 of the 39 shots he faced, and many of those were high-danger scoring chances for the Bruins — 17 in regulation.

— Taylor Hall had another good game with the top line of Patrice Bergeron and David Pastrnak. But with Brad Marchand coming back from a three-game suspension, it’s likely Hall will drop back to the second line with Coyle.

Sacco is hoping Hall will continue to keep the mindset he’s been playing with during his three-game stint on the top line.

“We’ll have to meet and talk about the lines with (Cassidy) and see where we want to go,” Sacco said. “But as far as Taylor goes, yeah, I mean, hopefully he can just continue pick up where he left off with whoever he’s playing with. He can play like that regardless of who he’s playing with. He just has to keep that keep that mindset.”

— Erik Haula provided one of the best assists for the Bruins thus far with his second-period helper to Charlie Coyle. Coyle was on the back post as Haula slid a backhanded pass through the crease to the tape with Coyle sending the one-timer past Vasilevskiy.

“No,” Coyle responded when asked if he expected Haula to get him the puck, “you just try to put yourself in positions. It’s a heck of a play whether it was through his legs or under his stick. But that was all about kind of shot-mentality. That was a great play by him.”

Sacco noted how Saturday was another step in the right direction for Haula.

“He’s playing better, there’s no question and that shows in his game,” the acting coach said. “He’s around the net. He’s on pucks. He’s competing. And so, like we said, his game is heading in the right direction and trending where we want it to be. And I think you’d have another level to maybe he could get to as well.”

— The Bruins now will head out for a three-game road trip to Canada beginning with the Edmonton Oilers on Wednesday. 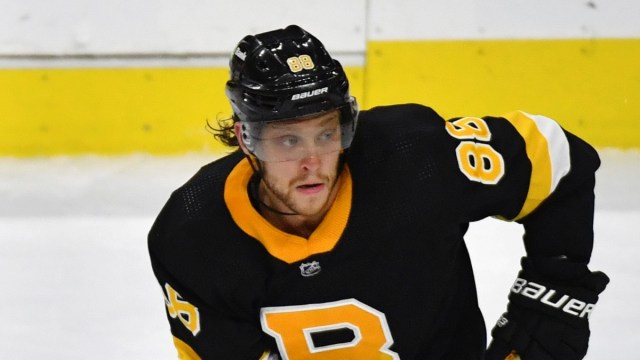 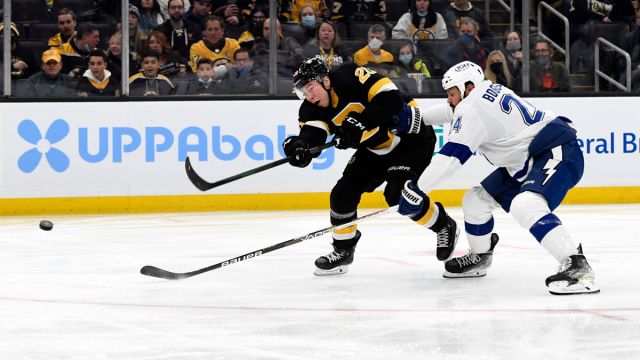