The Boston Bruins begin their Stanley Cup playoff run Monday night against the Carolina Hurricanes, a team they struggled mightily against in the regular season.

Carolina won the series 3-0-0 and outscored Boston 16-1. While that certainly looks as if that spells bad news for the Bruins, you have to remember the Black and Gold look a bit different than their last meeting in February.

Plus, in one of those losses they were without Patrice Bergeron and Brad Marchand.

The Hurricanes certainly pose a tall task for the Bruins after locking up the Metropolitan Division, but they are facing injuries of their own while the Bruins appear to be fully healthy.

Here are a few things to know ahead of Monday’s Game 1:

This is not the same Bruins team from February
The last time these two teams got together, a lot wasn’t really going right for the Bruins. But that was Feb. 10 and Boston has seemed to figure things out when it comes to its lines. Erik Haula has been a good fit as the second-line center. Craig Smith, Trent Frederic and Charlie Coyle have found incredibly strong chemistry and Jake DeBrusk has found a home on the top line.

We can’t forget about the addition of Hampus Lindholm, who the Bruins acquired at the NHL trade deadline in March, and he’s been a seamless fit for the defense.

Boston is a wild card team, but it certainly will give Carolina a run for its money in the first-round series.

The Hurricanes are dealing with big injuries
Frederik Andersen’s status is unclear for at least Game 1, if not beyond, due to a lower-body injury he suffered in mid-April. The goalie was stellar between the pipes for the Hurricanes in the regular season and went a perfect 3-0-0 against the B’s this season. Losing him for any amount of time would be a big blow to Carolina.

Andersen also has plenty of experience facing Boston in the playoffs. However, most of those memories involve his former Toronto Maple Leafs team getting bounced from Cup contention by the Black and Gold.

Antti Raanta is a respectable backup, but he struggled in his final seven appearances. The last thing any team wants are struggling goalies whether it’s due to injury or just a slump.

Boston’s power play has to come to life
The Bruins ended their abysmal 0-for-39 drought on the power play in their penultimate game of the regular season against the Buffalo Sabres, but it will be imperative for the B’s to take advantage of every power play opportunity they have against a team that is pretty complete up and down the lineup. The Bruins lost a lot of one-goal games that could have gone a different way had they just capitalized on the man advantage, they certainly don’t want that kind of outcome in the playoffs.

But they’ll need to beat a tough penalty kill
The Hurricanes boasted the NHL’s best penalty kill and allowed the fewest goals per game. The Bruins have some elite goal scorers in their top six that they will be relying on to break through and help their team past Carolina.

This is a big test for B’s goaltending
For as good as Linus Ullmark and Jeremy Swayman were for the Bruins this season, Ullmark never has played in a playoff game and Swayman has just 19 minutes of postseason experience. There’s no reason to think either of them will break under pressure, but it’s intriguing nonetheless since this is the first time in quite a long time Bruins fans will not see Tuukka Rask between the pipes in the spring.

The series will come down to defense
The Bruins and Hurricanes are two very good defensive teams while also showcasing elite offense. Carolina is fast and used its speed to beat up on the Bruins this season, but a new-look defense for Boston, wanting revenge for not winning against the Hurricanes this season and the veterans hungrier than ever to get the Black and Gold’s first Stanley Cup since 2011 should make for a physical battle.

Boston cannot let up late goals in the final seconds of a period, and the Hurricanes can’t get complacent knowing they beat up on the Bruins during the regular season. 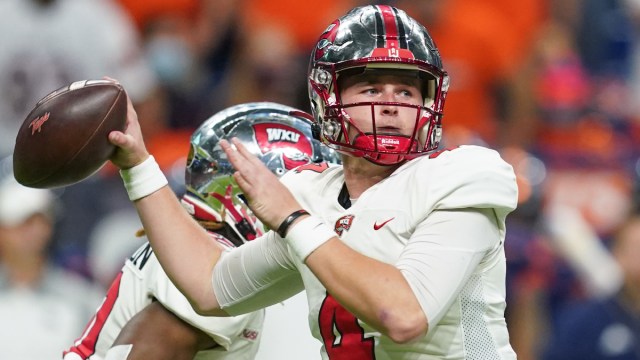 Why Patriots Drafted Another Quarterback One Year After Mac Jones