After a long and winding road through the NBA playoffs, the Boston Celtics and Golden State Warriors have emerged as two championship contenders entering the 2022 NBA Finals.

The Celtics advanced to the organization’s first title series in more than a decade after pulling out a pair of seven-game series, including a Game 7 thriller against the Miami Heat in the Eastern Conference finals. The Warriors lost four games combine during their three Western Conference series, and now are competing in their sixth NBA Finals in the last eight seasons.

With predictions and picks filling the airwaves and social media timelines over the past three days, we asked our NESN Digital team who they thought would win the best-of-seven series and who would win the Bill Russell NBA Finals MVP award.

Here are our “expert” picks: 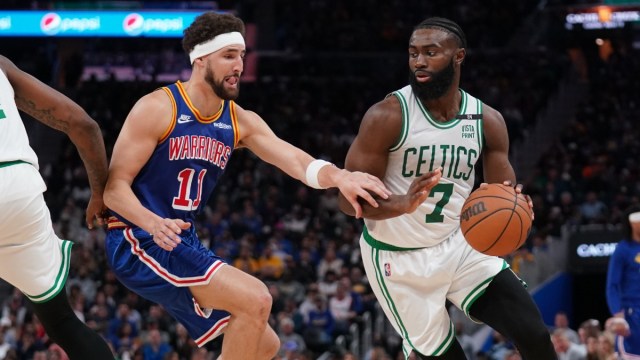 NBA Finals Prediction
Ben Watanabe: Celtics in 6 (+370 at DraftKings Sportsbook)
Defensively, the Celtics are able to defend the hoop and the 3-point line simultaneously thanks to their ability to switch. On the other end, the Celtics have the shooting depth from the likes of Derrick White, Al Horford and Grant Williams to take advantage of the holes in Golden State’s perimeter D.

Mike Cole: Warriors in 6 (+550 at DraftKings Sportsbook)
The Celtics aren’t completely outclassed in talent by Golden State, but Boston has had some obvious issues closing out games to this point. They’ve been able to survive against teams like Milwaukee and Miami, who weren’t able to fully capitalize on the Celtics’ lulls, but the Green won’t get so lucky against a battle-tested Warriors team that possesses generational shooters who won’t miss when given open looks.

Sean McGuire: Celtics in 6
No team in the league has matched up better with Golden State over the last few years, and the Celtics will present the Western Conference champions a difficult challenge this time, too. Boston’s switch-happy defense should make it tough on Golden State’s shooters. At this point, it only makes sense the Celtics cap off the most remarkable in-season turnaround with the organization’s long-awaited Banner 18.

Keagan Stiefel: Celtics in 6
The Celtics have always matched up well with these Dynasty-Era Warriors, going 10-7 versus Golden State since the 2014-15 season. Boston blew Golden State out in San Francisco back in March and lost a close home game where Romeo Langford was forced to start last December. The Celtics are bigger, more physical and have time to heal up.

Lauren Campbell: Celtics in 6
It will be no easy task, especially if the Celtics continue to commit turnovers. But the Warriors have been hobbled by turnovers themselves and have averaged nearly 15 per game in the playoffs. The C’s have size and physicality on their side and already have eliminated Giannis Antetokounmpo, Kyrie Irving, Kevin Durant and Kyle Lowry. Momentum is on Boston’s side.

Adam London: Celtics in 6
The Warriors have the NBA Finals experience, but Boston is starting to feel like a team of destiny following its midseason turnaround and hard-fought playoff battles that went the distance in Rounds 2 and 3. Boston matches up very well with Golden State and it should be able to hang tough with the Dubs as long as its health situation doesn’t worsen.

Ricky Doyle: Warriors in 5 (+450)
Just can’t shake the feeling that Boston emptied the tank against Miami. On paper, the Celtics match up well with the Warriors, boasting the kind of switch-heavy defense that could neutralize Golden State’s fast-paced offense. But experience matters in this case. And while the C’s have proven resilient this postseason, they’ve also had lapses in crunch time, which simply won’t cut it against the Dubs. Give the Warriors an inch and they’ll take a mile, unlike the Celtics’ prior playoff opponents.

Greg Dudek: Warriors in 7 (+310)
Golden State’s experience becomes too much and the Warriors have the killer instinct, unlike the Celtics, to finish a series off.

George Balekji: Warriors in 6
They’re rested, experienced, deep on both ends and only going to get healthier with Gary Payton, Otto Porter and Iggy returning.

“But wait, the Celtics are GREAT!!” They are, they are, but Rob Williams looking like a shell of himself in Game 7 is a massive red flag. Al Horford can’t drop into the zone on the pick-and-roll action against the Warriors like he did against the Heat. He needs to play up and suffocate the shooters. That leaves the rim and paint wide open. Rob’s athleticism to cover that ground is so important but he doesn’t have that pop. Three days off until Game 1, then two days off in-between games, is big but this series won’t be done in four or five. And that’s not good for Rob’s knee.

Scott Neville: Celtics in 7 (+650)
The length and size of the Celtics should aid them massively in this series.

In regards to the NBA Finals MVP, our “experts” view it similar to oddsmakers, as a bit of a two-horse race between Jayson Tatum and Steph Curry.

Keagan Stiefel: Tatum
If I’m picking the Celtics to win the series, I think I have to pick Jayson Tatum as MVP. Now that he’s gotten to the grand stage, I expect Boston’s superstar to go supernova. He should get those open looks he always gets, but against a less physical team I expect him to get downhill more often, with more trips to the free throw line as a result. Mark me down for multiple 40-point games from Tatum.

Adam London: Tatum
More often than not, the recipient of this award is the player with the most star power on the winning team. If I’m picking the Celtics to win it all, I have to roll with Tatum, who is fresh off an Eastern Conference finals MVP award. The points should be there for Tatum, but his contributions on the defensive end could take him over the top.

Scott Neville: Tatum
No explanation needed, he’s the best player on the team.

Mike Cole: Stephen Curry (+110)
This isn’t an overly complicated debate, as the best player on the winning team typically takes home the hardware, so Curry is the pick. From a betting angle, though, I’d be circling Klay Thompson at 15-1, given his ability to get hot and the defensive attention Curry will likely attract.

Greg Dudek: Curry
Curry gets his first NBA Finals MVP honor as he rises to the occasion on the league’s biggest stage.

George Balekji: Curry
I’m going with the story here. He’s the best offensive player on the team I pick to win. And a finals MVP is all that’s missing from Steph’s resume. This might be his last chance so if Golden State wins, the story wins.

Sean McGuire: Al Horford (+9000)
Vintage Al Horford has been on display throughout the postseason for the Celtics, and the veteran’s first trip to the NBA Finals helps that storyline continue. If Horford is able to have another 30-point night like he did in Game 4 against the Bucks, or another 20-point, 14-rebound performance like that of Game 3 against Miami, all while providing the elite defense he has, the MVP long-shot could become the real thing.

Lauren Campbell: Jaylen Brown (+1100)
Brown never is afraid to pick up the slack when needed and there’s no reason to think he won’t do just that when necessary — especially against Klay Thompson or Andrew Wiggins. Sure, he’ll need to outplay Jayson Tatum, but if Brown were to ever turn in a big performance, now would be the time. 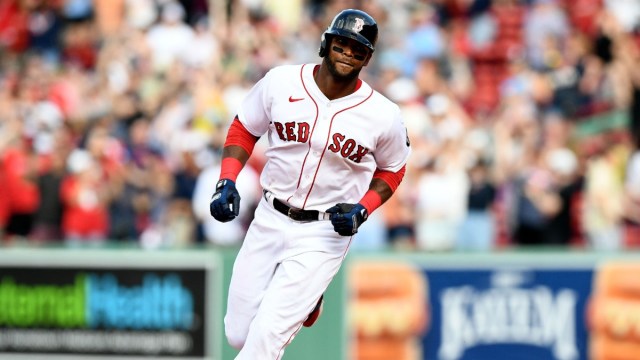 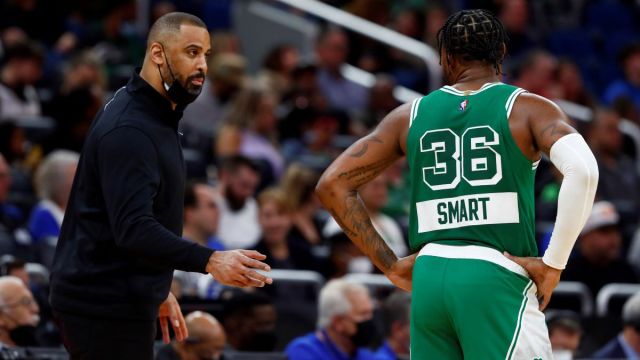