The Boston Celtics returned to practice Friday, and Kemba Walker was a full participant.

The point guard continues to rehab the left knee injury that has troubled him for some time now, but remains out for Friday’s game against the Orlando Magic as one of just two Boston players listed on the injury report for non-COVID-19 reasons.

The virus still is impacting him, though. Walker was cleared to return to practice last Friday, but by Saturday, positive COVID-19 tests within the organization shut down the practice facility.

Another speed bump on the former NBA All-Star’s road to recovery.

“He’s been able to continue to do his rehab in 1-on-1 settings. And his strengthening, his strengthening has gone fantastic,” Celtics coach Brad Stevens on Thursday said after practice. “He’s put in a ton of work. He went full go today for an hour with us; we did not go live but we did a lot of up and down, just trying to get our legs back in some ways with guys that haven’t done anything for a week. And he looked good.”

We’ve heard this song and dance before, though. Walker managed to return in the NBA Playoffs after missing time last season for his ailment, and said he was feeling great. 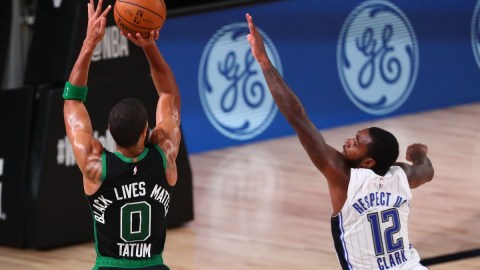 But that proved to be a bit hyperbolic, admitted the organization and Walker. And this time around, Walker isn’t going to be rushed back prematurely.

“I’m definitely going to make the best decision for myself, but honestly I’m feeling pretty good right now,” Walker said his his media availability. “I know I did say I was feeling pretty good the last time before the bubble — which I was — but you know, the timing in between just wasn’t really beneficial for me. But now, I am feeling really good and the way I’m feeling right now is different from the way I felt when I went into the bubble. I’ve just been able to take my time, I really just attacked my rehab from day one. I want to get healthy, I want to stay healthy, I want to try my best to not have any setbacks. So that’s the plan, I don’t know. Whenever I’m mentally ready to get out there and comfortable I will.”

Stevens is happy to leave that decision completely up to Walker and the Celtics training staff, and echoed Walker’s statement about the guard’s timeline for a return being more of a day-by-day thing.

Because of course, with the pandemic, they’re adapting on the fly and anything can happen.

“What that means, as far as next steps and playing and when he’ll play and all that stuff, that’s a decision for Kemba and our training staff. I think they put together a hell of a plan, to be honest,” Stevens said. “And I felt this way in the bubble but the bubble was constrained more by time, with regard to how quickly the playoffs were at hand. This has been a planned out, day-by-day, well-executed deal by our training staff and by Kemba.”

When Walker does finally return to the Celtics starting lineup, Stevens assures he’ll be himself.

“When he comes back, it’ll be because he’s ready,” Stevens said. “And because he feels great and he’s ready to be Kemba.”