The Boston Red Sox earned their 50th win of the season Wednesday, a 6-2 verdict over the Kansas City Royals, on a rain-soaked night at Fenway Park.

Boston officially is on pace for 100 wins at the midway point of their 162-game season. While many around the league, and the city, may continue to be surprised by the Red Sox’s overwhelming success to this point, manager Alex Cora and those inside the locker room are not.

Cora expressed just that while providing his first-half overview after his team’s latest victory.

“Our expectations are to win the World Series. We’re not even close,” Cora said on a postgame video conference. “We had a great first half. We played well for a while, but if you put everything into perspective this month, we didn’t play well. We won 18 games (10 losses). That’s how good we are. We can get away with mistakes, but we hate making mistakes. We have to clean that up and keep getting better.”

Cora has been pleased with Boston’s now six-game win streak, however. The Red Sox swept the New York Yankees and Wednesday’s win was the third in a row over the Royals.

“I do believe that we’ve been doing a good job in the last two series being aggressive, running the bases very aggressively, playing better defense. Sometimes the starters haven’t gave us enough innings, but the bullpen has been amazing,” Cora said. “… Putting the ball in play, going the other way, walking. Offensively, I think it was our best week so hopefully we can continue doing that.

— Cora called Brandon Workman’s 75 mph knuckle curve in the sixth inning the “biggest pitch of the night” for the Red Sox.

Workman, taking over for starter Martín Pérez with one out in the fifth, allowed a single to the first batter he faced to give the Royals first and third with one out. That knuckle curve, however, induced an inning-ending double play started by Rafael Devers. It helped Boston maintain its 5-2 advantage.

“That pitch by Work to get out of the inning was huge for this game,” Cora said. “You just got to keep praising these guys because they’ve been amazing. They’ve been so good.”

— Kiké Hernández made one of the best defensive plays of Boston’s season during the fifth inning.

The Red Sox centerfielder tracked the ball going to his left and made a sliding grab before crashing into the wall. It helped save one run as the Royals had a runner at third with two outs in what was then a 3-1 Boston lead.

— Hunter Renfroe blasted home run No. 12 this season with an eighth-inning shot that gave the Red Sox some extra breathing room.

— J.D. Martinez picked up exactly where he left off the night prior.

The Red Sox slugger recorded three RBIs as he blasted a three-run homer to center in the third to give Boston a 3-1 lead. Martinez had four RBIs in Boston’s win Tuesday.

— Pérez was more than effective as he pitched into the sixth inning. He ultimately was pulled after allowing two runs on seven hits over 5 1/3 innings. The veteran southpaw retired the side in the first and third and didn’t allow a runner to reach scoring position in the fourth.

“The first five innings everything was good,” Pérez said on a postgame video conference, noting it was harder to grip the baseball with the rain coming down hard in the sixth. “… I think it was a great game and we won, so that’s important.”

— Josh Taylor, who retired the side in the eighth, now has 24 consecutive scoreless innings. His ERA is down to 2.93 after having a 9.72 ERA on April 24, the day before his streak began, according to NESN’s Adam Pellerin.

— We were offered yet another positive update on Chris Sale before Wednesday’s game. The rehabbing left-hander threw another live batting practice.

Cora explained how Sale, who will throw again next week in Fort Myers while the Red Sox are on the West Coast, could begin his rehab stint shortly thereafter.

— The Red Sox return to Fenway at 1:10 p.m. ET on Thursday looking to compete the sweep over the Royals. 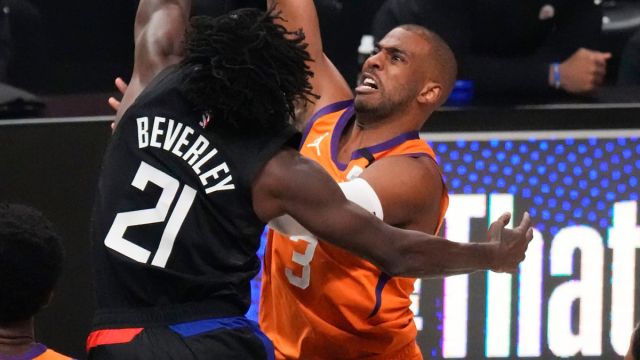