The New England Patriots closed out the 2021 preseason Sunday night with a 22-20 victory over the New York Giants at MetLife Stadium.

As the Patriots turn the page to cutdown day (Tuesday at 4 p.m. ET), here’s a look at a few players who stood out against the Giants and a few others who struggled:

STUDS
QB Mac Jones
Another efficient performance from the Patriots’ rookie quarterback. Jones went 10-of-14 for 156 yards and a touchdown across six series — averaging a preseason-best 11.1 yards per attempt — and opened the second half with back-to-back touchdown drives. But Cam Newton (2 of 5, 10 yards, interception) took every snap with New England’s starting offense for the second consecutive week. Who will start Week 1? Bill Belichick said postgame he has yet to make that decision.

DT Christian Barmore
Barmore will enter his rookie season with high expectations after a thoroughly impressive summer. The second-round draft pick continued to run with the starting defense and, like Uche, was involved in multiple impact plays as a pass rusher and run defender. The Patriots’ entire first-team front seven did a number on the Giants’ offensive line, with five different players

DB D’Angelo Ross
Entering the day as a roster long shot, Ross surprisingly got the start at slot cornerback with Jonathan Jones sidelined. He later transitioned to safety and pulled down an interception on third-and-goal from the 6-inch line.

CB Justin Bethel
One play before Ross’s INT, Bethel teamed with Uche and Barmore to stop running back Devontae Booker just shy of the goal line. Later, he nearly picked off a Jones pass on third down. Impressive defensive plays from someone who rarely sees the field outside of special teams.

TE Devin Asiasi
This had to be a nice confidence-builder for the second-year tight end. After arriving late to training camp following a positive COVID-19 test and dropping his lone target in last week’s game, Asiasi finished with four catches on four targets for 64 yards, surpassing his rookie-year totals in both categories. He was on the receiving end of arguably Jones’ best pass of the night: a back-shoulder ball up the seam that went for 30 yards.

RB J.J. Taylor
Days after the Patriots traded away Sony Michel, Taylor averaged 8.4 yards per carry (nine carries, 76 yards) and added two catches for 13 yards. The diminutive back also leveled the much, much larger Leonard Williams in pass protection and had a 23-yard punt return that helped set up a Patriots touchdown.

DT Bill Murray
Murray, New England’s preseason leader in quarterback pressures entering Sunday, tallied 1 1/2 sacks against the Giants’ reserve. He also continued to see significant reps in kick and punt coverage, a rarity for a player at his position. Murray is a roster long shot in a deep position group, but this was a strong preseason for the William & Mary product.

DUDS
CB Joejuan Williams
Ross bumped Williams out of the starting lineup, a troublesome development for the 2019 second-round draft pick. With cornerback Shaun Wade arriving via trade this week, Williams could be on the chopping block. (Wade would have landed in the “studs” category had he not allowed a 43-yard touchdown pass in the final seconds.)

CB Michael Jackson
The Giants frequently targeted Jackson in this game, and he struggled, allowing multiple chunk plays and a touchdown pass to Alex Bachman. Jackson also was flagged once for defensive holding and once for too many men on the field.

WR Gunner Olszewski
It was a tough night for Olszewski. He dropped his first target, had his second broken up and appeared to be at fault on the Mac Jones sack that ended the second quarter. Jones could be heard on the game broadcast yelling “Gunner!” and gesturing across the field, seemingly indicating he expected Olszewski to run a different route. The Patriots also chose to have Taylor return punts rather than the reigning All-Pro. Olszewski’s roster spot might not be as secure as expected.

DL Henry Anderson
It’s always notable when an established veteran plays deep into a preseason game. Anderson was one of those players Sunday. The former New York Jet has $3 million guaranteed in his contract and received a glowing review from Belichick last week, but he could be a surprise cut candidate. Outside linebacker Chase Winovich also was on the field late in the fourth quarter. 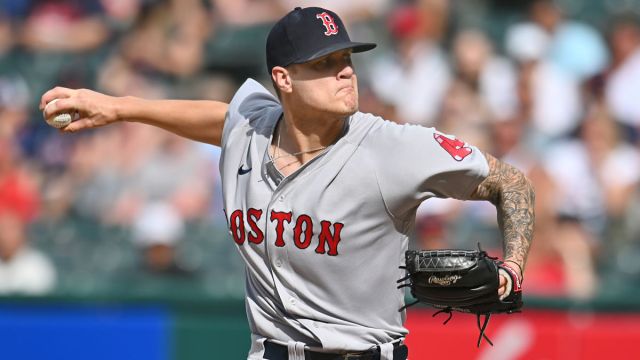 Red Sox Hope ‘Nothing Serious’ For Jonathan Araúz After Leaving Vs. Indians