The New England Patriots fell to the Buffalo Bills 33-21 on Sunday at Gillette Stadium. Here are six things we learned in that Week 16 matchup:

1. Maybe this team isn’t a Super Bowl contender after all
As recently as about 10 days ago, a date with Tom Brady in Los Angeles looked like a realistic possibility for this Patriots team. Their last two outings have tempered those expectations.

New England has looked overmatched since returning from its Week 14 bye, losing to the Indianapolis Colts in a game it trailed 20-0 and then trailing throughout in Sunday’s loss to Buffalo. After these losses, it’s fair to question whether the preceding seven-game win streak was partially a product of poor injury luck by the Patriots’ opponents.

Four of those seven wins came over the Cleveland Browns without Nick Chubb and Kareem Hunt; the Tennessee Titans without Derrick Henry, A.J. Brown and Julio Jones; the Atlanta Falcons without Cordarrelle Patterson and Calvin Ridley; and the Carolina Panthers with a half-strength Christian McCaffrey. Another was over a Los Angeles Chargers squad that’s gone 4-6 over its last 10 games and just gave up 41 points in a loss to the Houston Texans. Another was over the New York Jets, who are, well, the Jets. The seventh was against the Bills in blustery conditions that favored New England’s run game.

Now, in back-to-back matchups against playoff-caliber opponents — including a Buffalo team that was missing two key wideouts and three offensive linemen Sunday — the Patriots have struggled. It would take a full-on collapse to keep them out of the playoffs, but they’re now a long shot to win the AFC East and earn a home playoff game, as that would require the Bills to lose in Buffalo to either the Falcons or the Jets over the next two weeks.

The Patriots will host the Jacksonville Jaguars next Sunday — a game in which they will be favored by double digits — before closing out their schedule with an always-challenging trip to Miami.

2. What’s happened to this defense?
Isn’t this unit supposed to be one of the best in the NFL? Arguably the best? It hasn’t looked that way over the last two weeks.

The Patriots surrendered 170 rushing yards to Jonathan Taylor a week ago, but 67 of those came on one play, and the Colts’ passing game was nonexistent. It wasn’t hard to find silver linings in that loss.

Josh Allen and the Bills moved the ball at will against New England’s defense, reaching the red zone on every single drive that did not end in a kneeldown. All seven of them. Their possessions that did not produce touchdowns ended on New England’s 1-, 7- and 16-yard lines, yielding a turnover on downs (on a drop in the end zone) and a pair of field goals.

The Patriots couldn’t stop Allen, who threw for 314 yards and three touchdowns and ran for 64. They couldn’t stop seldom-used wideout Isaiah McKenzie, who, with Cole Beasley and Gabriel Davis on the reserve/COVID-19 list, went off for 11 catches, 125 yards and a touchdown. They made Matt Haack a spectator, going an entire game without forcing a single punt for the first time in the Bill Belichick era.

A team built to win with defense can’t do so when said defense is playing like this.

3. The slow starts cannot continue
That applies to both New England’s offense as a whole and quarterback Mac Jones individually. In the two games since their bye, the Patriots have scored just seven points in the first half and 31 points in the second half. They came back in both — with Jones playing appreciably better after halftime — but have been unable to erase their early deficits.

Jones went 5-for-13 for 47 yards with an interception over the first two quarters Sunday, including a streak of five straight incompletions to end the half. Outside of one early touchdown drive that featured 10 running plays on 13 snaps, the Patriots gained just two first-half first downs, with one coming on a roughing the passer penalty.

The Patriots have come back from halftime deficits in just two of their nine wins this season, and both of those were within one score at the break (down six vs. Texans; down one vs. Chargers). They’re 7-2 when leading at the half, 2-3 when trailing and 0-1 when tied.

Overall, Sunday was a rough outing for Jones, who posted career lows in completion percentage (43.8%), yards per attempt (4.5) and passer rating (31.4) and threw two interceptions. Patriots QBs traditionally have struggled against the Bills under head coach Sean McDermott, but it’s now been weeks since Jones has delivered a thoroughly impressive passing performance.

In they have hopes of a deep playoff run, the Patriots will need more out of their first-year signal-caller.

1. N’Keal Harry drops an on-the-money pass from Jones that would have resulted in a 15-plus-yard gain. One play later, Jones tries to force a pass to Harry that’s tipped by a linebacker and intercepted.

2. Christian Barmore jumps offsides on fourth-and-7 despite being lined up directly over the center — a mortal sin for a defensive lineman. One play later, Allen finds Stefon Diggs for 23 yards and a first down. Three plays after that, Diggs beats J.C. Jackson for a 12-yard touchdown that puts Buffalo up 17-7.

3. Gifted a first down by a roughing the passer call, the Patriots are driving late in the first half when offensive tackle Trent Brown is flagged for unsportsmanlike conduct for jawing with a Bills defender. This, coupled with a late hit call that’s controversially reversed, turns a second-and-3 from near midfield into a second-and-18 from the Patriots’ 32. New England eventually punts.

Center David Andrews also had a taunting call that negated a defensive personal foul, but the Patriots overcame that and scored two plays later. There were other errors, too, like the two would-be interceptions that hit off Jackson’s hands.

“I know J.C.’s kicking himself for that (almost) pick, but we’ve got to have those,” linebacker Kyle Van Noy said postgame.

The Colts loss had many of those same trappings: costly penalties, turnovers, drops, blown chances. Bad football, as Belichick would say.

5. Damien Harris’ hamstring is just fine
Harris was one of the few bright spots for New England, rushing for 103 yards and three touchdowns at a 5.7 yards-per-carry clip. He looked no worse for wear after missing last Saturday’s game with an injured hammy suffered during the win over Buffalo two weeks earlier. Despite missing most of the second half of that initial matchup, Harris racked up 219 rushing yards and four scores in two games against Buffalo this season.

It remains to be seen when Harris’ running mate, Rhamondre Stevenson, will be able to return. The rookie was placed on the COVID list Friday after missing all three practices last week. The Patriots went to a two-back rotation with Stevenson sidelined, using only Harris and Brandon Bolden. J.J. Taylor dressed Sunday but did not play.

6. Belichick’s fourth-down mindset might be shifting
The Patriots went an uncharacteristic 5-for-6 on fourth down against Buffalo, nearly equaling their total of successful fourth-down conversions from the first 15 weeks (6-for-11). Entering Sunday, only the Seattle Seahawks had gone for it less frequently than Belichick’s club.

Each of the Patriots’ first two touchdown drives featured a pair of converted fourth downs, including an especially nifty speed option involving Jones and Harris.

New England only faced so many fourth-down opportunities, though, because it went a season-worst 1-for-10 on third down. Over their two Bills matchups, the Patriots were just 3-of-22 on third down (16.3%).

“Some of those plays shouldn’t even have been there,” Jones said. “We should have skipped some fourth downs and third downs. First and second downs we could have had bigger plays from me. Those are the plays you want to make, and we did a good job making some of them. But we really don’t even want to be in that spot.” 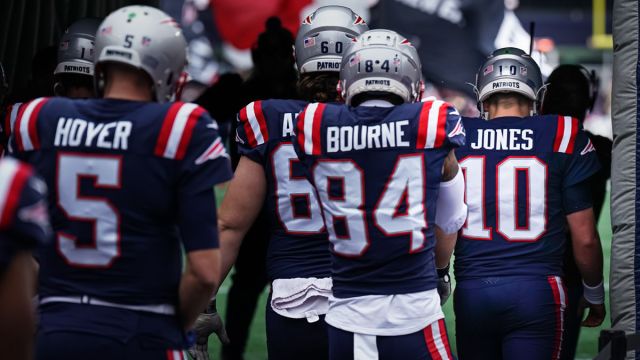 What Mike Florio Fears About Patriots After Second Consecutive Loss 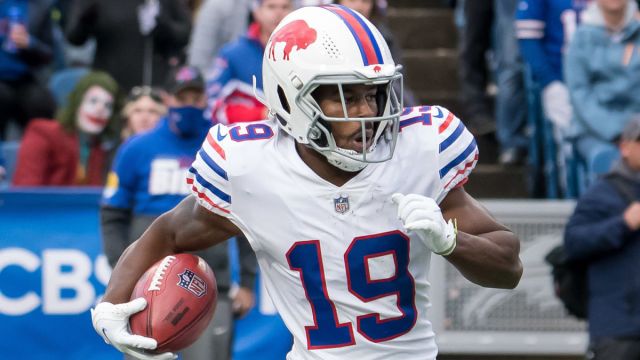