During joint practices against the Cincinnati Bengals on Thursday, Donald and his Rams teammates got into a bit of a skirmish. It somehow resulted in Donald holding a Cincinnati helmet in at least one of his hands as the 6-foot-1, 280-pound lineman showcased his Hulk-like anger by swinging the helmet around in the brawl.

Based on videos and photos captured as the events unfolded, it’s just as terrifying as you might imagine. You can check out videos here and here along with an incredible photo of the scene here.

Donald’s actions, perhaps to no surprise, had many on social media questioning whether the league would take any action while equating the helmet swing to that of Cleveland Browns’ Myles Garrett. Garrett was suspended what proved to be six games for his actions against Pittsburgh Steelers quarterback Mason Rudolph, but it’s worth differentiating how Garrett did so in a nationally televised game.

The Rams-Bengals fight during training camp certainly isn’t alone this summer. The New England Patriots, specifically, got involved in fights with the Carolina Panthers during consecutive joint practices last week with each team penalizing its players rather than the league.

If Donald is, in fact, punished, good luck to whoever has to tell him. 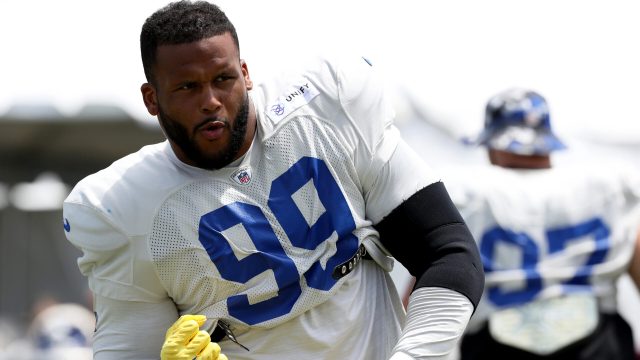