Patriots Training Camp Observations: Everything We Saw In 11th Practice Skip to content

FOXBORO, Mass. — Sorely needing a bounce-back day after an abysmal showing on Day 10 of training camp, the Patriots’ offense finally delivered some reason for optimism Tuesday.

Here’s everything we observed during New England’s 11th camp practice:

Asiasi returned to practice after leaving early on Day 10, but he and Keene both moved to the side rehab field after warmups and did not take part in competitive drills.

Two of Jones’ incompletions were dropped by receivers, and he threw one interception: to linebacker Harvey Langi on first pass play of 11s. Jones was attempting to hit a slanting Kendrick Bourne on the play, but his pass was tipped at the line and landed in Langi’s arms.

The Patriots slowed the pace of Tuesday’s practice, and roughly half of Jones’ competitive reps came against the second-team defense.

Before practice, head coach Bill Belichick said the team had yet to decide whether Jones will play in Thursday night’s preseason opener against the New York Giants.

ASSORTED NOTES
— As mentioned at the top, this was a much, much better day for the Patriots’ much-maligned offense.

That was a low bar to clear after Monday’s camp-worst showing, and Tuesday was far from perfect. But New England’s operation ran more smoothly, with improved offensive line play and, finally, a moderately successful rushing attack.

None of Jones’ 15 dropbacks in full-team drills resulted in a play-killing “sack,” scramble or throwaway, and Patriots running backs were able to hit on some positive runs, including one by Rhamondre Stevenson near the goal line and another while running behind left tackle Trent Brown.

The concerns over the Patriots’ offense didn’t evaporate after this one practice, but they at least were able to gain a bit of momentum as they prepare to square off against a different team for the first time.

— With Wynn sitting out team drills for the second straight day, the Patriots made a change to their top offensive unit. Yodny Cajuste replaced Justin Herron at right tackle after the latter struggled during Monday’s practice.

Herron, who’s been a more competent left tackle in his NFL career, played on the left side with the second unit. The 2021 sixth-round pick has been viewed as the Patriots’ clear third tackle, but that status may be in jeopardy.

Cajuste has seen very little regular-season action since being drafted in the third round in 2020. The West Virginia product has played offensive snaps in just three career games and was benched in one of them. But he performed well Tuesday, holding up to pass rushes from Matthew Judon and Josh Uche and getting some decent push in the run game.

It was a clear upgrade from what Herron gave the Patriots at that spot one day earlier, and it should earn Cajuste more first-team looks until Wynn — who, it should be noted, has not enjoyed the strongest camp as he moves over from left tackle — is able to return.

— Center David Andrews and defensive tackle Christian Barmore were kicked out of practice for fighting during 11-on-11 drills.

The scrap occurred after a completion to tight end Hunter Henry and quickly sucked in nearly every member of the offense and defense, including Mac Jones.

While Barmore immediately exited toward the locker room, Andrews watched the next several minutes of practice on one knee from the opposite side of the field, ran a round of hill sprints with strength and conditioning coach Moses Cabrera, resumed watching practice from afar with an unidentified Patriots employee and then returned to the field to break down New England’s post-practice offensive huddle.

The incident marked the second time in three practices that players were thrown out for fighting. Uche and Herron were sent to the showers for scrapping after the whistle during last Friday’s simulation game.

A separate scuffle also broke out during an O-line-versus-D-line earlier in Tuesday’s practice, but that was deemed minor enough that no players were ejected.

— Rookie running back Pierre Strong made a move up the depth chart, getting the nod over third-year pro J.J. Taylor in one red-zone 11-on-11 period. The fourth-round pick took a handoff and a toss from Hoyer and had a nice blitz pickup — a necessary skill for any young back trying to earn playing time in New England.

An undisclosed injury kept Strong — the fastest running back in this year’s draft class — out of competitive drills for the first week-plus of camp, but he’s finally getting a chance to showcase his skills. He’ll be a player to watch Thursday night.

— Jonathan Jones continued to rep at outside cornerback, as he had in the previous two practices. That’s been a notable shift, as the vast majority of Jones’ NFL snaps have come in the slot (or, to a lesser extent, at safety).

This could just be Belichick trying out a new alignment in training camp, but New England seems to have more quality depth in the slot than it does outside. Playing Jones on the perimeter, assuming he can handle the different demands of that position, could be a way for the Patriots to put more of their best defensive backs on the field at once.

Myles Bryant and rookie Marcus Jones have seen the most work in the slot of late.

Parker has been more involved this week after a quiet stretch.

— Drops were an issue for Patriots pass-catchers. Taylor, Jonnu Smith, Jakobi Meyers, Kevin Harris, Tre Nixon and Josh Hammond each had one, with Smith’s and Hammond’s coming on passes from Jones.

— One wideout who’s seen a lot of action lately: Lil’Jordan Humphrey, who’s been peppered with targets in each of the last two practices.

Humphrey has run almost exclusively with the scout team in camp, but he did get some reps with Jones and the top offense Tuesday, catching one pass on two targets from the starting QB.

— Meyers, a former quarterback, showed off his arm during receiver drills.

UP NEXT
The Patriots will hold meetings and a closed walkthrough Wednesday before hosting the Giants on Thursday night. Kickoff for that exhibition matchup is set for 7 p.m. ET. 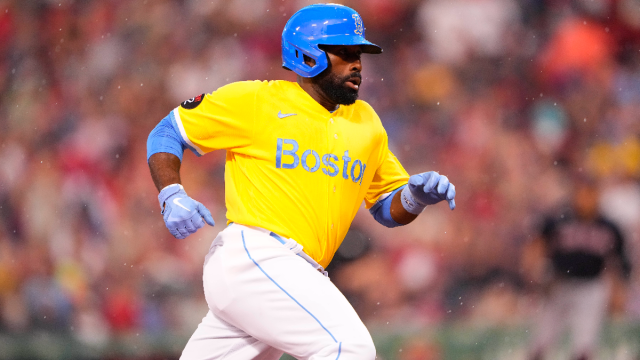 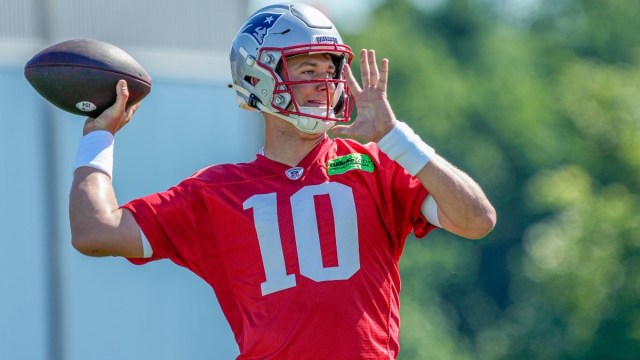