The second-seeded Boston Celtics overcame adversity and now will take on the top-seeded Miami Heat in the Eastern Conference finals.

The Celtics advanced after a Game 7 win over the Milwaukee Bucks in the conference semifinals Sunday, earning consecutive victories after a devastating Game 5 loss. On the other sideline, Jimmy Butler and the Heat eliminated the Philadelphia 76ers in six games and return to action after not having played since Thursday.

Celtics-Heat will tip off Tuesday night in the series opener. But if you’re a bettor interested in placing a wager on the series, it’s worth making note of a few betting trends. 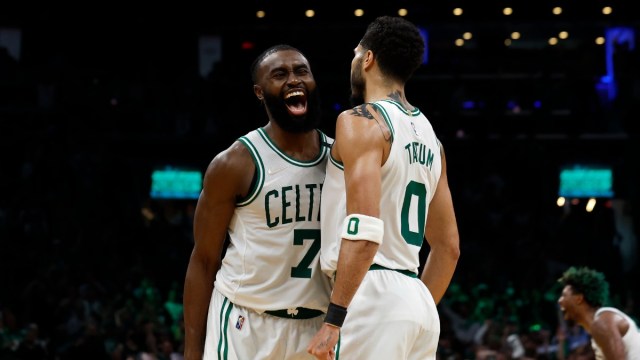 Profitable Under
Both the Heat and Celtics play a similar style of basketball. Miami, relying on its defense, will look to muck it up against Jayson Tatum and company. Boston, a team that finished the regular season with the best defensive rating in the NBA, also will rely on its physical, switch-happy style on that end of the floor. And the betting statistics depict that rather vividly. The Under has cashed in 82% of games for the Heat (2-9 against the total) during the postseason and 64% of the Celtics contests (4-7) during the NBA playoffs.

The Game 1 total currently is set at over/under 204 at DraftKings Sportsbook and FanDuel Sportsbook, with BetMGM taking it down to 203.5 after opening at 206.5. That’s a low number seeing how Boston games were somewhere in the 210s last series, but given the nature of the two teams, it may not be low enough.

Postseason plays
It’s rather simple, but with a decent sample size entering the Eastern Conference finals, it’s worth noting how teams have performed against the spread this postseason. The Celtics have the best cover rate of any team in the playoffs as they have covered 73% of the time in their 11 games (8-3). Miami is not far behind, though, as the Heat have covered 64% of the time in the playoffs (7-4).

If that sample size still remains too small for you, then it’s worth noting how Miami had the fourth-best ATS rate in NBA this season, including the playoffs. The Heat have covered in 58% (53-39-1) of their 82 regular-season games and 11 postseason games. The Celtics are just behind Heat. Boston covered in 57% (51-39-3) including the same regular-season total and 11 playoff games.

ATS as home favorite
Given that it is the conference finals, bettors are not going to see major spreads on the board. We’ve likely learned that already in Game 1 as the Celtics, despite the fact they travel after playing Game 7 against the Bucks on Sunday, are a mere 1.5-point underdog. On the other hand, the Heat have not played since Thursday and have home court. It likely depicts how things will look moving forward.

Both teams, however, are far from sure things when it comes to covering the spread as a home favorite. Miami covered the spread at home in just 52% of its games this season (22-20-0) while Boston is even worse in that area, covering in 44% of its home games (19-24-1) on the campaign.

ATS as road dog
Seeing as both teams have covered in the majority of their games, despite being either even or less than profitable at home, their road splits should be a bit better, right? They are. Miami had the second-best coverage rate while entering the game as a road dog. The Heat covered 67% of the time (14-7) on the season as a road dog. The Celtics, similarly, covered in 64% of their games (14-8-1) when they were a road underdog. Boston’s second-half surge and the Heat consistently sitting atop the Eastern Conference standings did limit the amount of times either was viewed as a road dog, as depicted.

The Celtics, despite not having home court advantage, surprising remain the betting favorite to win the series. We’ll see if that translates to the Green being a road favorite in one game (Game 7?) in Miami.

Steelers-Mitch Trubisky Report May Damper Rookie Of The Year Odds