The trade chatter pertaining to Brooklyn Nets superstar Kevin Durant was dealt a massive, multi-fold development Monday with reports from two of the most well-known NBA reporters.

First, it was ESPN’s Adrian Wojnarowski revealing the Boston Celtics were among teams with interest for Durant, who requested a trade from the Nets last month. And then it was The Athletic’s Shams Charania who took it a step further, reporting Boston offered Jaylen Brown, Derrick White and draft capital to the Nets for Durant.

The two combine to acknowledge how the Celtics weren’t the only team showing interest as both the Miami Heat and Toronto Raptors also remain involved.

Well, the number of Durant headlines prompted bookmakers to take notice with Bookies.com offering an update to their hypothetical next team odds. Of note, the odds released by Bookies.com are not available at a specific sportsbook. 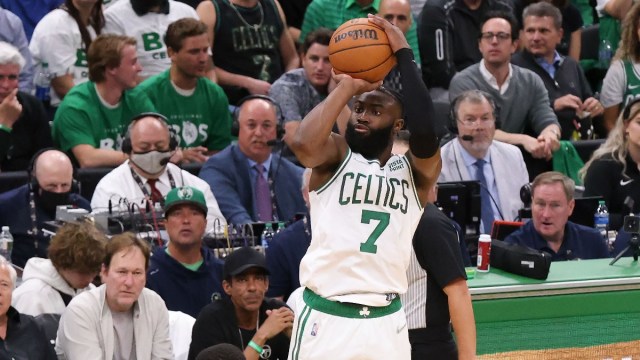 Boston ranks third on the list behind the favored Nets and Heat. The betting board hints the Heat have a 23.5% chance Durant is playing for them next season while the Celtics’ prices represent an implied probability of 21%.

It also represents a rather noticeable change from last month when the Heat were favored in front of the Los Angeles Clippers, Portland Trail Blazers and Los Angeles Lakers. At the time, Bookies.com’s Adam Thompson had the Celtics +850 to land Durant in front of the Milwaukee Bucks, Chicago Bulls and Atlanta Hawks, who all were listed at +950. The difference in prices indicate Boston’s likelihood to land Durant via trade doubled in the last month with the Celtics’ probability sitting at 10.5% chance on June 28.