After getting back in the win column Tuesday, the Boston Bruins are looking to keep things rolling Thursday when they face the Penguins in the first of two straight games against Pittsburgh at TD Garden.

Boston won’t make any changes to its skaters from Tuesday’s game. There was a distant possibility that Sean Kuraly, who was cleared off the COVID-19 list Wednesday, might come back, but he hasn’t been able to skate much so the Bruins elected to keep him out.

As a result, the Bruins are going to keep the young-blood fourth line of Anton Blidh, Trent Frederic and Karson Kuhlman together, with Anders Bjork and Zach Senyshyn flanking Charlie Coyle on the third line.

Jeremy Lauzon is expected to stay up on the top defensive pairing with Charlie McAvoy, thus keeping the Matt Grzelcyk-Brandon Carlo and Jakub Zboril-Connor Clifton duos in tact.

Here are the projected lineups for Bruins-Penguins. 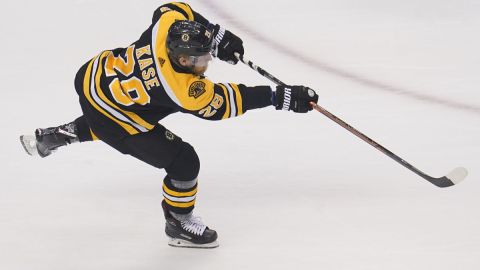