As running back Damien Harris scratched and clawed his way toward the New York Jets’ goal line Sunday afternoon, a crowd of New England Patriots teammates formed behind him.

One of the players who helped push Harris into the end zone for his first touchdown of the season was none other than the Patriots’ rookie quarterback.

It was an impressive hustle play by Jones, who was at 35-yard line when Harris broke through the line of scrimmage — but one the Patriots probably would prefer he not make.

“Apparently, I got some help from Mac Jones, too,” Harris, the QB’s former Alabama teammate, told reporters after the Patriots’ 25-6 win at MetLife Stadium. “… I appreciate it. But I hope he never does it again. We need him.”

Jones explained his thought process during his postgame news conference.

“We wanted to score, and everybody was down there pushing,” he told reporters. “My job is to try to make sure nothing bad happens and try to be by the ball. Maybe I should just stay back, but at the end of the day, (I’m) just trying to get the touchdown.

“The offensive line created the holes, Damien made a guy miss, I kind of carried out my fake, and there he goes. He kind of shot out the back door, and I was like, ‘All right, here we go.’ He did a good job getting it in. I thought we ran the ball hard and made improvements there.”

Jones added: “(I was) just doing my job. Sometimes, it’s not (to) run down the field on that play, but just to see Damien trying and the offensive line running down there, I felt like I could help. But at the end of the day, they made the big hole for him, and he did all the work. So it shouldn’t be anything about me.”

Harris ran especially hard on his 26-yard touchdown romp, breaking no fewer than seven tackles as he bulldozed through all three levels of New York’s defense. He finished with a game-high 62 rushing yards on 16 carries after a late fumble spoiled a 100-yard effort in Week 1.

“It definitely was a statement for the offense and for him, as well,” fellow running back James White told reporters. “Coming back off last week, I know he was motivated to get back out there, and to have a run like that and finish in the end zone, I think it was great for him. Obviously, I think there’s a lot of things we can correct out there, but that play was huge.”

White scored New England’s other touchdown Sunday, rushing in from 7 yards out late in the first quarter. Kicker Nick Folk provided the remaining Patriots points with a 4-for-4 performance on field goals.

With Jones operating a relatively conservative passing attack — he went 22-for-30 for 186 yards with only a small handful of downfield throws — two of his most notable contributions came on running plays. In addition to his push on Harris’s touchdown, the young QB also delivered a block that sprung receiver Kendrick Bourne for a 16-yard gain on a reverse.

“My job was to get the end guy on the line of scrimmage,” Jones told reporters. “That’s what I was supposed to do, and KB did a good job getting around the edge. I think for the receivers, they played well, and I need to get them the ball more. And I will.”

“Those are both really competitive kids,” Belichick said, referring to Jones and Jets rookie quarterback Zach Wilson. “I like Mac’s competitiveness, and he brings a lot there.” 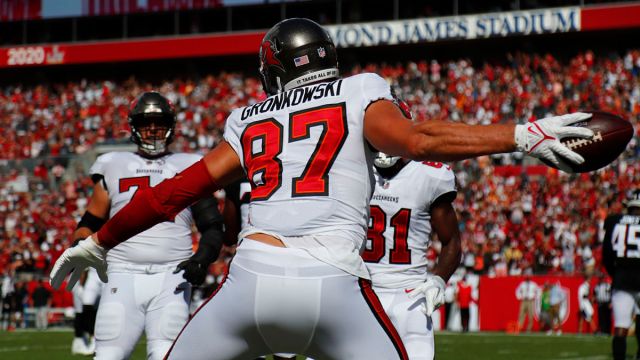 Rob Gronkowski Has Typically Dominant First Half In Buccaneers-Falcons 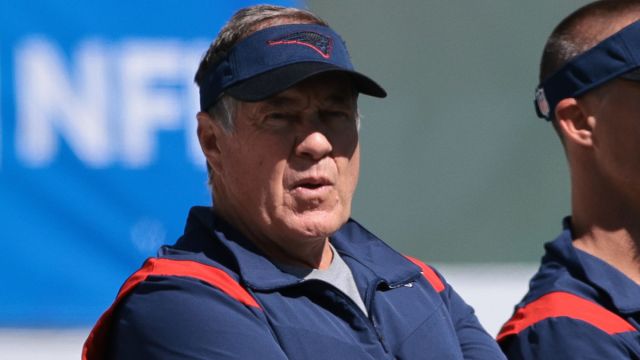