There have been considerable changes in Pittsburgh since the Patriots and Steelers last played in 2019. But one thing remains constant: The Steelers’ annually dangerous passing game.

Fortunately for New England, Mitch Trubisky, not Ben Roethlisberger, will be under center at Acrisure Stadium on Sunday. Roethlisberger wasn’t able to do much against the Patriots over the last two decades, but he was a far better player than Trubisky.

Still, even with a below-average quarterback leading the Pittsburgh offense, the Patriots will have their work cut out for them in slowing down the Steelers’ bevy of offensive skilled players. Never mind the fact that Trubisky and the Steelers just beat the Cincinnati Bengals in their season opener.

Of course, it starts with Pittsburgh’s talented receiving corps. The Steelers feature Diontae Johnson, one of the better all-around receivers in the NFL; Chase Claypool, a tall, athletic freak who’s used in a variety of ways — including on end-arounds; and George Pickens, a second-round pick in 2022 who has the size, speed and ability to be an impact player. They also have solid depth at receiver, including old friend Gunner Olszewski, who played nine offensive snaps on Sunday — in addition to returning punts — in his Steelers debut.

“This group’s a really good group,” Patriots cornerbacks coach Mike Pellegrino said Tuesday. “You’ve got Diontaie Johnson out there, Claypool and Pickett. So, those guys are extremely talented guys, big guys. You also have (Miles) Boykin, (Steven) Simms and Gunner over there, as well, that complement the group really well.

“I would say, for the most part, the challenge is them throwing up the football. They do a really good job of that, making contested-catch situations.”

But it’s not just about the wideouts. Pittsburgh also rosters 24-year-old Najee Harris, one of the better receiving backs in football, and second-year tight end Pat Freiermuth, an ascending player at his position.

“You’ve gotta look at the whole group,” Patriots head coach Bill Belichick said before Wednesday’s practice. “Harris is a problem. Tight ends are a problem. Receivers are a problem. Athletic quarterback, he’s scrambled against us (with the Chicago Bears in 2018), he had a couple big scrambles against Cincinnati — not necessarily for long yardage, but to extend plays, get away from the blitz, things like that. It’s really everything.

“You can’t just go into this game and say, ‘Well we’re just gonna shut down one guy.’ That simply is don’t gonna be the answer. Johnson’s an explosive player. Claypool, you know, big, fast, good with the ball in his hands. I would say Freiermuth … they use Gunner in there. So, they’ve got a bunch of guys that are explosive. And the quarterback himself — you can’t let him run around.”

Belichick seems especially impressed with Freiermuth, a Massachusetts native who went to Pittsburgh in the second round of the 2021 NFL Draft. The Penn State product caught five balls for 75 yards against the Bengals and is coming off a rookie season in which he delivered five touchdowns.

“Good player,” Belichick said. “Athletic kid, big target, catches the ball well, competitive blocker, has good size to cover up some people at the end of the line of scrimmage. He’s done a good job for them. Made big plays last week. So, he’s part of their good skill package. That’s a good skill group and he?s one of them.

“They definitely have some plays there that are his kind of plays — where he’s kind of the only receiver, or the primary receiver, and he’s come through for them. He’s comfortable when he gets those opportunities.”

Containing the Steelers’ pass-catchers isn’t the only thing New England must do to leave Pittsburgh with a win this weekend. First and foremost, the Patriots must find ways to put their vanilla, unexplosive offense in position to succeed against the Steelers’ great defense, which will be without star edge rusher T.J. Watt. New England also needs to clean up many of the sloppy, undisciplined issues that have plagued the Patriots since the start of last season.

But even if the Patriots play a cleaner game than they did in Week 1 against the Miami Dolphins and move the ball with some efficiency, it might not matter if Johnson, Claypool and company start running wild.

New England and Pittsburgh will kick off at 1 p.m. ET on Sunday. 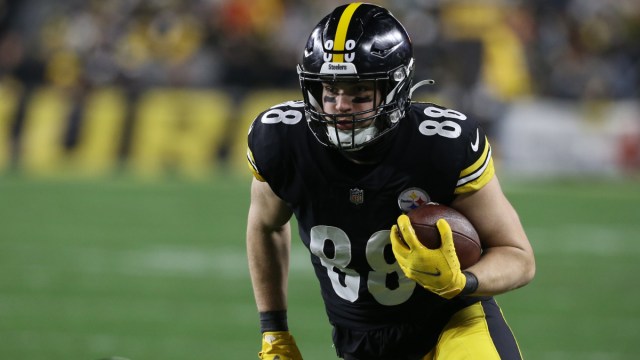