Jimmy Garoppolo’s world got turned upside down Monday night when he found out he was leaving New England and headed to Cali.

The New England Patriots traded the quarterback to the San Francisco 49ers for a 2018 second-round pick in the biggest blockbuster of the 2017 NFL season. Obviously, it’s a turning point in Garoppolo’s career, as he now gets a chance to be what he wants: the man.

But as is always the case, this trade ultimately will affect many more than just Jimmy G. Here’s the long, tangled list of those involved both directly and indirectly.

JIMMY GAROPPOLO
Well, duh. With this trade, Garoppolo gets a chance to prove he’s ready and able to be an effective starting quarterback in the league. We’ve heard nothing but good things about the 25-year-old since he was drafted out of Eastern Illinois, and now we find out if the hype is for real.

TOM BRADY
Now, as has been the case for nearly 20 years, the Patriots are Tom Brady’s team. At 40 years old, he’s the quarterback of the future in Foxboro … the near future, at least. Brady has long said he wants to play until his mid-40s, and the Patriots apparently believe he can. And if you’re into good stories and/or couldn’t fathom the sight of Brady playing in a different uniform, well, it seems he’ll end his career with the Flying Elvises. The Kentucky Derby crew just got a little lighter, though.

BILL BELICHICK
Belichick said this back in 2009 when NFL Films profiled him for the “A Football Life” documentary: “I don’t wanna be like Marv Levy and coaching into my 70s, so you don’t have to worry about that.” Well, Belichick is now 65. According to a report shortly after the Super Bowl, Belichick wants to coach at least five more years (the timeline checks out), but it also was noted that he wanted to see what he could do without Brady. Now, it looks like Brady and Belichick will ride out their Patriots tenures together … or so it seems.

JULIAN EDELMAN
Always nice to know your BFF is gonna be hanging around for a few more years at least. Also: this.

KYLE SHANAHAN
Speaking of head coaches, the rebuild in San Francisco continues, and now Shanahan has his man. We saw what he was able to do with a competent quarterback in Atlanta, and given the Falcons’ struggles now that Shanahan is gone, his stock is pretty high. That’s a lot of pressure, though, and it will be fascinating to see how he responds, especially given how competitive the NFC West figures to be for the next few seasons.

KIRK COUSINS
Speaking of Shanahan, a reunion with his former quarterback in Washington, Kirk Cousins, seemed like a natural fit. Now that Garoppolo is a Niner, however, it takes one very obvious suitor for Cousins out of the picture. Given the overall status of quarterback play across the NFL, it still seems likely Cousins will have options, but San Francisco almost certainly won’t be one of them.

BRIAN HOYER
Everyone assumes Hoyer, a former Patriots backup who was cut by the 49ers to make room for Garoppolo, will eventually land in New England, where there currently are zero quarterbacks not named Tom Brady. If that does happen, it’s a pretty good upgrade for Hoyer to go from the winless Niners to a perennial Super Bowl contender.

2018 QUARTERBACK DRAFT CLASS
The Patriots, you’d reckon, are in the market for a quarterback. Unless they move draft picks before Tuesday’s trade deadline, the Patriots almost certainly will head into the 2018 NFL Draft with four of the first 96 selections. And if they want to find a successor to Garoppolo as the successor to Brady, they’ll have options. According to WalterFootball.com, there are as many as five quarterbacks who could go as high as the first round. There also are plenty of middle-round prospects like Mason Rudolph or Baker Mayfield who the Patriots could target as their next QB of the future (assuming Brady ever retires). Given the way Garoppolo’s stock went up in Foxboro, all of those prospects should be hoping to hear from Belichick on draft day.

DON YEE
It doesn’t suck to be Yee, the agent who represents Brady and Garoppolo.

Don Yee agent for both Brady and JG emerges as the real winner–he gets JG to a good place and Brady continues to play.

Which brings us to …

THE CLEVELAND BROWNS
The poor, poor Browns. No team was connected to Garoppolo more than Cleveland. And while it’s still not entirely clear what the Browns offered the Patriots for Garoppolo, they certainly could have offered a better deal than San Francisco, if that’s what they wanted. However, it still might not have mattered.

Grossi: "Belichick is sympathetic to Garoppolo and Don Yee. They weren't going to ship him here. To football Siberia."

ADAM SCHEFTER
Look, no one gets it right more than Schefter, and he rarely gets beat to a scoop. In fact, he had the Garoppolo trade first, which might have been a little bittersweet for the ESPN reporter. In the offseason, Schefter insisted the Patriots wouldn’t trade Garoppolo. Then he doubled down. And tripled down. No one was more certain the Patriots would hold on to Garoppolo than Schefter. Things obviously changed, and like we said, Schefter’s field goal percentage, so to speak, is better than anyone else’s. But he certainly heard it from folks on Twitter on Monday night.

SINGLE MEN OF THE GREATER FOXBORO AREA
There’s one less handsome man to compete with in the 508. Good for those guys. Bummer for the ladies, though. 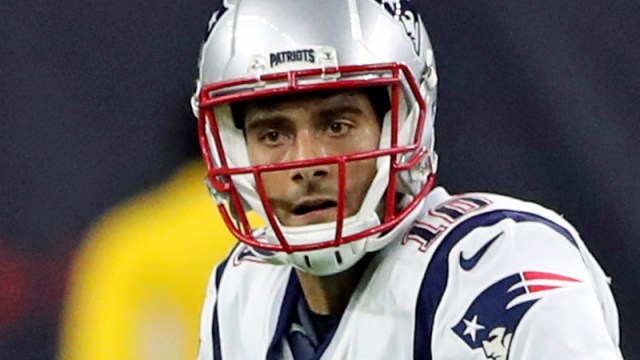 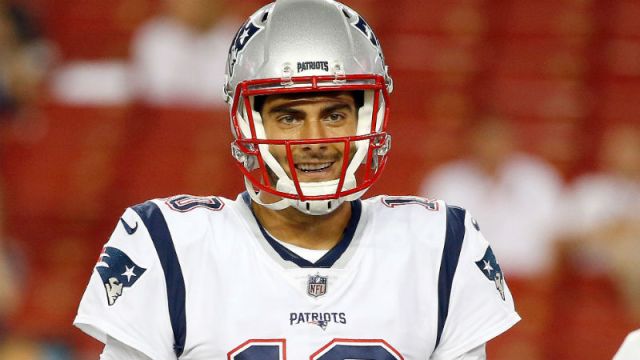