Adrian Phillips didn’t try to deny it. Having the game he did Sunday against the team that let him walk in free agency felt good — damn good.

The New England Patriots safety intercepted two Justin Herbert passes and returned one for a go-ahead, fourth-quarter touchdown in a 27-24 win over the Los Angeles Chargers at SoFi Stadium.

Minutes after the final whistle, Phillips, who spent his first five NFL seasons with the Chargers, was asked whether this performance was “the stuff of dreams” for him. He smiled.

“You know, uh,” he said, pausing while he considered his answer. Then he laughed and replied: “Yeah. Yeah.”

Phillips was a productive and well-respected player for the Chargers, but they chose not to re-sign him when his contract expired after the 2019 season. He landed with the Patriots and has become an important and versatile cog in New England’s defense.

With the Patriots also beating the Chargers 45-0 a year ago, Phillips now is 2-0 against his old team — an accomplishment he clearly relishes.

“I love it out here (in Los Angeles), and every time that we get to play them, you kind of — everybody always wants to kind of stick it to their former team,” Phillips told reporters. “This is a great organization that we played against today, and just to be able to go out there and play against them and end up having the game that I had, it was sweet. I loved it. But — yeah, it was sweet.”

With LA clinging to a 17-16 lead, Herbert zipped a third-down pass to Jared Cook that the tight end never saw. Phillips capitalized on the apparent miscommunication, diving to intercept the ball at the 25-yard line before standing up and sprinting into the end zone.

“I knew when they didn’t blow the whistle, I knew I was getting into the end zone,” Phillips said.

Phillips didn’t want to reveal details about the Patriots’ defensive game plan, but he said he had “a few options” on that particular play and chose the right one. He also credited New England’s pass rush for forcing a hurried throw.

“I can’t give away too much, but you watch film the whole week and hope that you get the opportunity to execute the way that you want to execute,” Phillips said. “So we got the call, I saw the formation, I had a few options that I could make, and I just so happened to make the right option, and we ended up getting pressure on Herbert, which was our big focus all day. Just get pressure in his face. We made him make a quick decision, Cook wasn’t ready for it and I was able to take advantage of it and go to the end zone.”

A largely underappreciated player, Phillips has been arguably the Patriots’ best and most consistent defensive back since the start of training camp. He entered Week 8 as Pro Football Focus’s highest-graded Patriots defender and the 14th-highest-graded safety in the NFL.

“He has a lot of good memories about being here and being on the Chargers,” safety Devin McCourty told reporters postgame. “I think as a player, to come back to a team that, however it ends up working out, they didn’t feel the value was there for you to remain there, I think that’s special. AP works his butt off, and to have the kind of game that he had today was huge. He’s a key part of our defense. I think everyone here saw that last year, the impact that he had, and he’s continuing to do that.”

Out of necessity on a depleted roster, Phillips essentially became a full-time inside linebacker last season, playing the majority of his defensive snaps at the second level. He still plays there some on passing downs, but a deeper linebacking corps has allowed him to spend more time at his natural position this season.

After leading the Patriots with 107 tackles in 2020, he now has three interceptions through eight games, surpassing his previous career high of two and tying cornerback J.C. Jackson for the team lead.

“Man, I’m telling y’all, I’m so happy for that guy,” edge rusher Matt Judon told reporters. “He works his butt off, and every opportunity that he gets, he excels at whatever role we need him. Like, the dude plays linebacker, safety, dime, he’ll rush the edge for us — anything we ask him to do, he excels at it. And I was just so happy for him to come back, playing his old team, and for him to be able to do that — to put us up like that — that was big for him.”

Phillips’ first interception Sunday also led to Patriots points. He caught a tipped pass off the hands of running back Austin Ekeler late in the first half, setting up one of Nick Folk’s four field goals.

After surrendering touchdowns on two of the Chargers’ first three drives, the Patriots locked down LA’s explosive offense, holding Herbert and Co. to just three total points over their next seven possessions. The two worst performances of the 2019 NFL Offensive Player of the Year’s promising career both have come against New England.

The Patriots’ other ex-Charger, tight end Hunter Henry, had a quieter day in his return to Los Angeles, finishing with one catch on three targets for 33 yards. But Henry did come up with the onside kick recovery that clinched New England’s second consecutive victory. 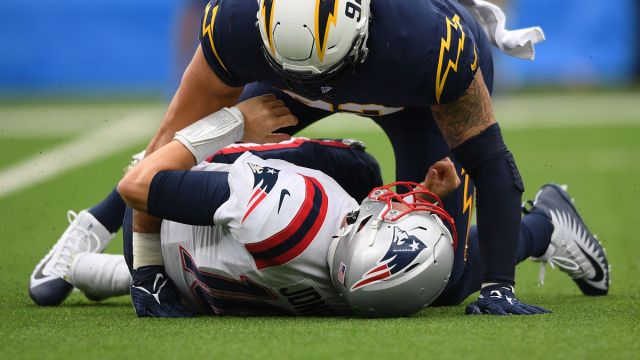 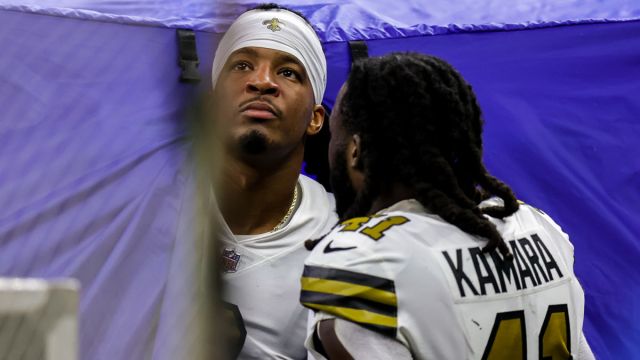