Why It's Unfair To Compare Patriots, Raiders After Davante Adams Trade Skip to content

There are some Patriots fans right now who probably would swap Bill Belichick for Josh McDaniels and Davie Ziegler. Such is the envy generated by splashy free agent moves.

And while it’s impossible to not feel like New England is stagnating — perhaps even regressing — while its AFC rivals aggressively improve, it also is unfair to draw a straight line between the Raiders and the Patriots — despite the obvious connections. What McDaniels and Ziegler did this week in Las Vegas likely wouldn’t be replicated if the duo were in charge in New England. Using their offseason activity as an excuse to claim Belichick is holding the Patriots back is unfair to Belichick, who just won the PFWA’s Executive of the Year Award.

The Raiders, who, like the Patriots, went 10-7 last season and lost in the AFC wild-card round, undeniably are better than they were a couple of months ago. Vegas added superstar receiver Davante Adams, stud pass-rusher Chandler Jones, underrated corner Anthony Averett and stout defensive tackle Bilal Nichols. The Raiders also signed a pair of ex-Patriots in Brandon Bolden and Jakob Johnson.

At this point, you wouldn’t have to work too hard to craft an argument for Vegas being better than New England. And credit to Ziegler and McDaniels for swinging big.

But here’s the thing: The Raiders, specifically McDaniels and Ziegler, needed to make moves like that. The Denver Broncos just traded for Russell Wilson. The Los Angeles Chargers have one of the best offenses in the NFL and have spent this offseason dramatically improving their defense. The Kansas City Chiefs have Patrick Mahomes.

If the Raiders want to compete in that AFC West with Derek Carr at quarterback, they must be aggressive in assembling a talented, competitive roster. Last season’s Raiders were a pleasant surprise, but nobody was confusing them for actual contenders.

Moreover, McDaniels, more than a decade removed from his disastrous tenure in Denver, might’ve wanted to send an early statement in an attempt to win over a jaded, transplanted fanbase. Ziegler might have similar motivations in his first real crack at this NFL general manager thing. There’s something to be said for justifying a hire.

The Raiders franchise hasn’t won a Super Bowl title since 1984. If they don’t go all-in on trying to compete with Wilson, Herbert and Mahomes, that streak will continue for the foreseeable future. Boosting the roster with players such as Adams and Jones not only makes the Raiders a better football team, but also creates tangible fan enthusiasm and makes Vegas an attractive destination to other NFL players. For now, people are taking the Raiders very seriously. That’s a huge win for McDaniels and Ziegler.

Obviously, the Patriots are in a different position. People take them seriously. They have six Super Bowl titles in the last 20 years. They have Belichick, still a draw for free agents despite what the morning show talking heads say. They’re a marquee NFL franchise with a championship pedigree. They, too, want to win, but they and their fans aren’t nearly as desperate.

That’s not to say the Patriots shouldn’t be more aggressive in trying to build off of last season, when rookie quarterback Mac Jones and a retooled roster brought the franchise back to the postseason after a year off. They should be. Remaining competitive in the NFL is as difficult as replacing a legendary quarterback — just ask the Miami Dolphins. Things go sideways in a hurry if teams aren’t careful — just ask the 2020 Patriots.

That said, let’s let the offseason play out before running Belichick out of town, shall we? There still are good players available in free agency, and multiple reports indicate New England is more interested in trades this offseason. Plus, if the Patriots can repeat last year’s draft success, they’ll be well on their way toward returning to annual contention, assuming Jones continues his upward trajectory.

A lot can happen between now and training camp. Let’s see what happens.

As for the Raiders, claiming they’re better than the Patriots is no slam-dunk take. Their defense ranked 13 spots behind the Patriots’ last season in Football Outsiders‘ defensive DVOA metric. Does a budget corner, a decent tackle and a 32-year-old Chandler Jones completely close that gap? Perhaps, especially when you consider New England still hasn’t replaced J.C. Jackson at cornerback. But it’s close.

On offense, Vegas ranked 10 spots behind in New England in DVOA. The Raiders’ addition of Adams, coupled with New England’s losses on the offensive line, have made it a closer right. But Carr is Carr, and the Patriots still might have some moves up their sleeves this offseason.

And, as good as McDaniels might be, the edge always goes to Belichick. It just does.

Ultimately, the Raiders are in a different position than the Patriots this offseason, and the two teams remain very close — on paper. Using their respective offseasons to craft hot takes about either team is easy, but lazy.

The good news? New England will visit Las Vegas sometime next season. We should have a clearer sense of where both teams stand by the time the Patriots arrive back in Foxboro. 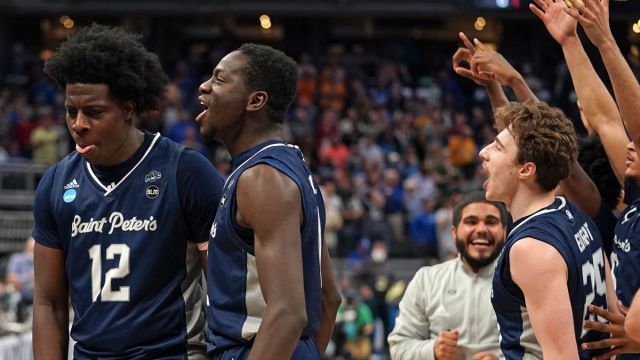 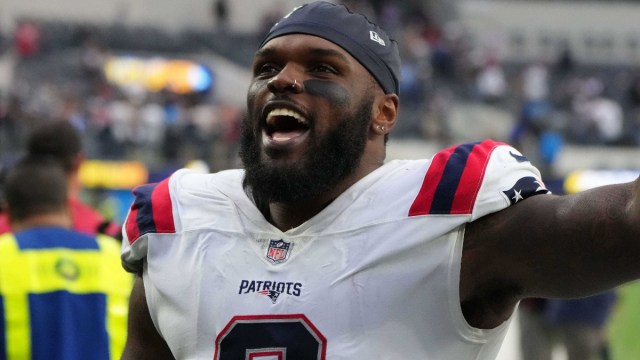