Tiger Woods’ health and safety obviously was the first thing on everyone’s minds Tuesday after news broke that the legendary golfer was involved in a serious car crash near Los Angeles.

After living through the tragic helicopter death of NBA legend Kobe Bryant just over a year ago, it taught many how sports are far and away secondary.

Thankfully, we’ve since heard reports that Woods was “alert enough” at the scene his injuries are not thought to be life-threatening. Again, that’s first and foremost.

His career on the course, though, unfortunately could be over. After all, it seemed like his immediate future wasn’t concrete even before the accident.

Woods was interviewed by CBS Sports’ Jim Nantz on Sunday as he hosted the Genesis Invitational at Riviera Country Club. Woods’ comments at the time, just two days before the crash, made it seem his aspirations, at least short-term, were far from certain.

“God I hope so. I’ve got to get there first,” Woods told Nantz when asked about playing at Augusta National this April, seven weeks away.

Woods, you may recall, underwent a microdiscectomy on his back to remove a pressurized disc fragment which was pinching a nerve. It was brought on after discomfort during the PNC Championship in December.

“A lot of it is based on my surgeons and doctors and therapist and making sure I do it correctly,” Woods told Nantz. “This is the only back I’ve got, I don’t have much more wiggle room left.”

The 45-year-old Woods told Nantz he didn’t have any concrete plans to return, and that his 2021 schedule was dependent on how his body would recover.

Unfortunately, his back injury now seems like the least of Woods’ worries. Woods was treated for “multiple” leg injuries, per his agent Mark Steinberg, and immediately underwent surgery. ESPN reported there was a possibility of two broken legs.

And this comes after Woods has had four surgeries on his left knee, his first had microdiscectomy in 2014 then two similar procedures in 2015. He had an anterior lumbar interbody fusion surgery in April 2017, as well.

We’re wishing Tiger the best in his recovery, and just hope it includes a return to the course. 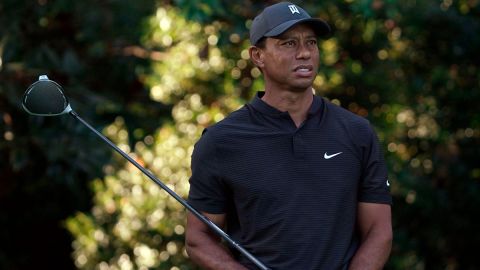