Bruins Notes: Everything Went Right For Boston In Win Vs. Penguins Skip to content

The Boston Bruins did not look like the same team that played the Pittsburgh Penguins on Sunday afternoon.

Which, if you’re keeping score at home, is a good thing.

The Bruins beat the Penguins 3-1 at PPG Paints Arena on Tuesday in a game that featured solid goaltending, the second line doing second line things and all-around solid play for 60 minutes. Boston came to fight (quite literally if you ask Jeremy Lauzon), and never let off the gas.

It was a much-needed win for the B’s, who lost two straight ahead of Tuesday’s game, and is in a tight race to hold on to the fourth and final playoff spot in the East Division. As of Tuesday night, the New York Rangers are four points behind the Bruins, while the New York Islanders are just one point ahead of Boston.

Every game counts at this point, and the Bruins will need everyone on board to bring their A-game. And after calling out the third and fourth lines in Sunday’s loss, head coach Bruce Cassidy liked what he saw from his lineup.

“There was a lot to like from everybody tonight, to be honest with you,” he said. “Played a good, determined game. But those guys, Krech’s goal, we talked about their neutral-zone forecheck … it’s low enough where you’re not putting the centerman in harm’s way, so good for Charlie (McAvoy) to make it. … And Krech just used his skill. Hall, same thing. Sometimes you gotta beat guys one-on-one in this league, gotta pick your spots, when to do it, when’s the appropriate time. They both did.

“… Kudos to them. Our top guys did the finishing tonight and the bottom guys did a lot of the dirty work, the grunt work, the physicality. It was a good formula for us.”

It certainly was, to say the least.

Here are some other notes from Tuesday’s Bruins-Penguins game:

— Brad Marchand provided some insurance for the Bruins with his 26th goal of the season. He now leads the Bruins in goals, points and assists.

— Krejci’s goal was absolutely filthy thanks to a nice pass from Charlie McAvoy. The defenseman, though, wasn’t the only one to amass an assist of the play.

Tuukka Rask was credited with the secondary helper on the goal that made it 1-0. It’s the goalie’s second assist in as many games.

So, what did Rask think of the sequence?

“Well, I started it,” he said. “I told Chuckie to go wide there. … But then him and Krech took care of most part of that rush, and obviously, Krech made a nice finish there. When I have time and space to make plays with the puck I try to help us out as much as I can and not turn it over, and it’s been working pretty well this year.”

You have to see the goal for yourself:

— The Bruins, with help from the Rangers, kept the Penguins from clinching a playoff berth.

Pittsburgh needed to win or have New York lose, neither of which happened. 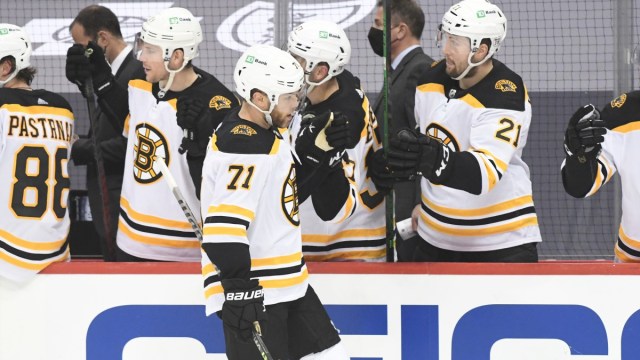 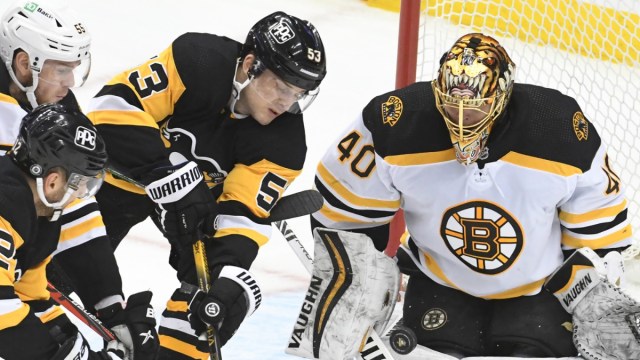