Both goaltenders looked fantastic pretty much all night in Game 3 of the Boston Bruins vs. New York Islanders series.

So, naturally, an ugly goal from Brad Marchand proved to be the winner.

The Bruins’ star winger scored on a bad-angle attempt just 3:36 into the extra period to give Boston a 2-1 win and series lead.

Hemmed in the defensive zone, Patrice Bergeron did a fine job to win a puck battle and backhanded it along the end boards to Charlie McAvoy. The defenseman carried it all the way to the offensive blue line before slipping a pass just to his left to Marchand. The winger dashed along the left wing boards, and shortly before reaching the end line launched a shot that beat Semyon Varlamov.

“It was a great job by the guys getting the puck out of the zone,” Marchand said over Zoom after the game. “They had been out there a long time and were tired, so Chucky did a really good job slowing the play down, allowing (Sean Kuraly) to change and me to get on the ice and get some space. And then, just tried to get it on net, and it found its way in.”

Fluky things tend to happen in overtime. Marchand’s shot wouldn’t exactly fall under the umbrella of a Grade A opportunity, but that hardly is a reason not to shoot in the extra period.

“Obviously not a great one, but any puck — especially in overtime — has a chance to go in,” Marchand said. “That’s always something I think every team talks about going into overtime, is you can’t pass up a shot, and that’s another example of it.”

With the winner, Marchand now is tied for second-most OT playoff goals in Bruins history with three. He trails Bergeron, who has four.

Here are some more notes from Bruins-Islanders Game 3:

The second line right winger, who missed Game 2 with a lower-body injury sustained in Game 1, indicated that he “felt great.”

He looked fine, too. The 31-year-old uncorked a slick wrister in the first period that opened the scoring for the game.

— Also, enjoy this on-brand line from Smith out of context.

Certainly a quote he lives by.

— Brandon Carlo left in the third period, but he is in a surprisingly good spot. In fact, Bruins head coach Bruce Cassidy actually talked to the defenseman after the game.

You can read more details on the Carlo update here.

Carlo exited after playing a puck behind the net and taking a hit from Cal Clutterbuck. It was a clean hit, but Carlo, who has a concussion history, slammed his head into the boards on the play. He stumbled to the ice, and it took him a few tries to get up.

That he was around to even talk to his coach and teammates is a promising sign.

— It was a history-making night for Cassidy.

The victory was Cassidy’s 33rd in the postseason as Bruins head coach, moving him past Art Ross and putting him in sole possession of second place in team history.

Cassidy now has a long way to go, as the top spot is held by Claude Julien, who guided Boston to 57 postseason victories.

— The Bruins can push the Islanders to the brink of elimination in Game 4. That’s set for Saturday at 7:15 p.m. ET on NBC, but, as always, you can watch a full hour of pregame and postgame coverage on NESN. We’ll also carry intermission reports on NESN.com. 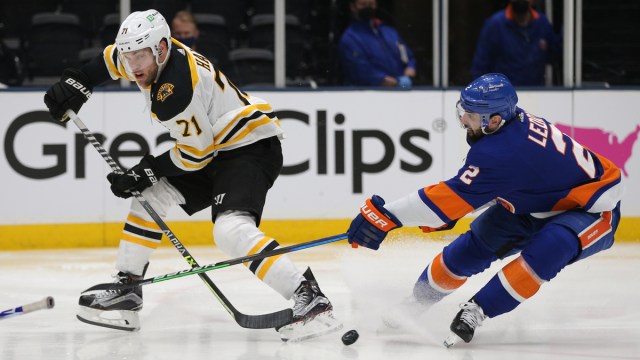