The Boston Red Sox began their season on a low note, dropping their first three games against the Baltimore Orioles at Fenway Park.

But things changed when the Tampa Bay Rays came to town.

The Red Sox swept the Rays out of Fenway and now sit at 3-3 on the season. Everything looked good in the recent series — offense, defense, pitching. The two series also looked vastly different, and Red Sox fans were given plenty of reasons to be optimistic looking toward the future.

It’s still early in the season, yes, and there’s still plenty of baseball left to be played. But there was a slew of things to like about the Red Sox over their last three games.

Let’s take a look at some:

J.D. MARTINEZ IS BACK
Martinez owned up to struggling in 2020 and always has prided himself as being a trained hitter. The Red Sox designated hitter constantly looked at his batting practice and his at-bats during the game to correct mistakes he saw.

That wasn’t a thing in 2020 due to COVID-19, but that isn’t a problem this season, and it appears Martinez sees the ball better than ever.

Martinez hit a walk-off double to win the game Tuesday night in 12 innings and hit a home run off the Pesky Pole earlier in the game. He now has 11 hits on the season with as many RBIs and six doubles.

Matt Barnes also looked solid and has six strikeouts on the season, while Tanner Houck, though optioned to the Red Sox’s alternate training site in Worcester, Mass. on Wednesday, provided a start and relief while showcasing his nasty slider and showed a lot of promise for the future.

Eduardo Rodriguez will make his season debut Thursday against the Orioles after missing his Opening Day start due to dead arm. He missed all of 2020 due to myocarditis after contracting COVID-19, but he looked good in spring training, and it certainly will be a welcome sight when he takes the mound.

CHRISTIAN VAZQUEZ HITTING BOMBS
Vazquez has proven he’s a defensive force behind the plate, but he’s really come into an offensive threat the last few seasons. The catcher absolutely obliterated two home runs in as many days that went up and over the Green Monster.

We saw Wednesday that Vazquez served as the designated hitter while Kevin Plawecki manned the catcher’s position, so it’s clear manager Alex Cora doesn’t want to take a hot bat out of the lineup.

THE TEAM LOOKS LIKE IT’S HAVING FUN
Baseball is fun, and it’s clear the Red Sox are having a lot of it.

There’s been plenty of smiles, laughs, dancing and home run celebrations, especially over the last three games, and it’s not hard to see the smiles across the players faces.

See what we mean?

How can you not have fun in the home run cart?

Oh, and don’t forget about the bat flips:

Like we mentioned earlier, there’s still 154 games left to be played. A lot can happen. But for now, enjoy the three-game winning streak. 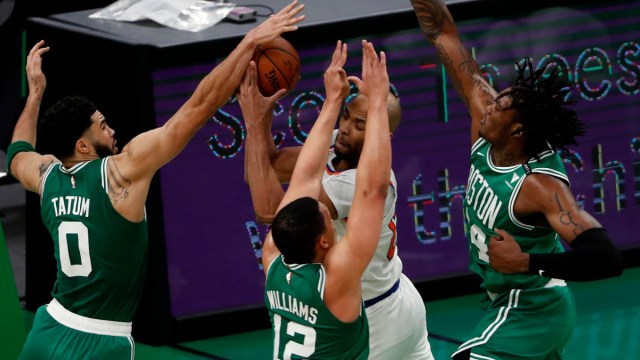 Brad Stevens Calls Celtics’ Win Vs. Knicks One Of Boston’s Best Of Late 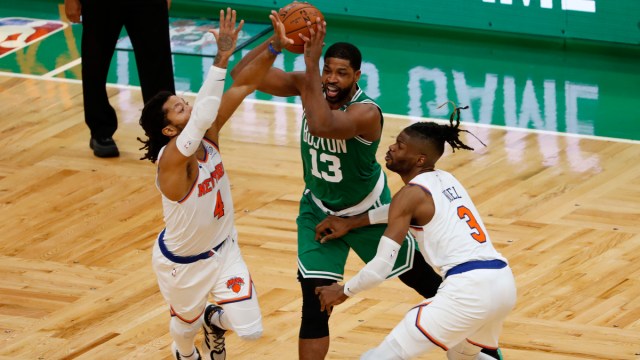 Jayson Tatum, Jaylen Brown Among Celtics Happy To Have Tristan Thompson Back