In a tale of two ballgames, the Boston Red Sox fell to the Tampa Bay Rays in 10 innings (and nearly five hours) on Monday at Fenway Park.

Chris Sale had an up-and-down start, but the Red Sox exploded in a six-run second inning to give Boston a 7-1 lead that held into the top of the fourth, when the Rays embarked on a four-run rally of their own.

After a scoreless fifth inning on both sides, the consistent Rays tacked on one run in each of the final four innings to force extras, where the Red Sox couldn’t match the effort and ended up falling 11-10.

“It was a great bad game,” manager Alex Cora said after the game over Zoom. “All the way to the last hit. It wasn’t great as far as like throwing to the bases, backing up guys, putting guys away. It was great that we had a chance to tie the game or win it at the end, but at the same time you can’t give a big-league team more than 27 outs and we did.”

There were high points — there had to be, because six-run innings that go through the order aren’t a fluke — but oh, were there low points, too.

The good: Sale ended the day with one earned run and six strikeouts. Jonathan Araúz hit a home run. Taylor Motter, in his first Red Sox start, hit a double and a triple and had an RBI. Hunter Renfroe went 3-for-5. Every starter reached base.

The bad: Sale also allowed 10 hits and exited after 3 1/3 innings, his shortest start since returning to the team. Garrett Whitlock blew the save and earned his third loss of the season. Alex Verdugo reached base on a walk but he was the only starter who didn’t record a hit.

“There’s no doubt, this was definitely a weird one,” Sale said after the game.

Isn’t that the truth.

Here are other notes from Monday’s Red Sox-Rays game:

— The Rays now are 1-69 when trailing the red Sox by six runs, according to ESPN Stats & Information (via the Red Sox.)

— Rays star Wander Franco was 4-for-4 in his first four at-bats and thus became the youngest player to log four hits against the Red Sox since Ty Cobb in 1939.

— To make this game weirder, there was an intentional balk from one-time Red Sox pitcher Collin McHugh.

— Beyond guiding the Red Sox through Monday’s game, Sale also has been a leader in the clubhouse. Before the game, Cora praised the ace’s development in that respect:

“I think his up and downs the last few years actually make him a better leader,” he said.

— It may have been Sale Day, but it was a big day for Nathan Eovaldi, who reached 10 years of Major League Baseball service time Monday. Cora ended his pregame press conference by offering congratulations to the star.

— Monday’s game saw a pretty lengthy delay in the first inning as home plate umpire Manny Gonzalez took a foul ball to the facemask. Laz Diaz replaced him and the game briefly proceeded with a three-man crew.

— The Red Sox made a series of significant roster moves before the game, headlined by the return of shortstop José Iglesias. He made his debut in the top of the eighth when he switched spots with Motter.

— Josh Taylor was reinstated from the COVID-19 related injured list before Monday’s game, and he briefly got the ball in the seventh. He allowed a run on one hit in 2/3rds of an inning. 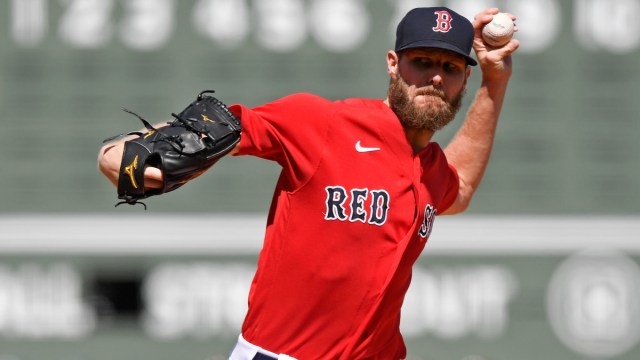