The NBA is a talent-driven league, and the Boston Celtics possess high-level talent ready to take the next step.

That talent, that superstar potential is exactly why the Celtics are a contender to reach the NBA Finals and ultimately claim Banner 18.

Jayson Tatum, first and foremost, enters the 2020-21 season fresh off making an All-NBA Team, which allowed him to sign a rookie max contract extension this offseason. Tatum earned his first NBA All-Star selection and even was named the league’s Player of the Month before the COVID-19 pandemic halted the season. Boston has high hopes for Tatum, and there’s no reason why he can’t reach a superstar echelon this season.

Jaylen Brown is the Robin to Tatum’s Batman, and that’s no disrespect to the fifth-year pro. Brown was snubbed from an NBA All-Star bid last year, but concluded his regular season scoring 18 or more points during six of the seven seeding games in Orlando. He proceeded to score 20 or more points in 11 of 17 playoff games, including performances of 31 (vs. Toronto), 29 (vs. Philadelphia) and 28 (vs. Miami).

In his first year in Boston, Kemba Walker proved a great addition to a Celtics team in dire need of a veteran presence. Upon returning to full health, Walker should take a step further having one year with Tatum, Brown and head coach Brad Stevens. Marcus Smart, similarly, has become a crucial piece of the puzzle and is as good defensively as any guard in the league. He’s continued to improve on the offense end, as well, and a few of his hot shooting nights earned the Celtics wins. Those two combine to make very good backcourt.

Oh yeah, and the Celtics finally addressed their big man need that they’ve went so long without. The signing of Tristan Thompson could be a major signing for president of basketball operations Danny Ainge. And it wasn’t Ainge’s only nice offseason pick up either. Adding veteran guard Jeff Teague to the bench should prove an upgrade over Brad Wanamaker. Both Thompson and Teague provide a veteran presence which Ainge admitted the Celtics were seeking out.

Of course, the Celtics did have a major piece leave in free agency. Again. Will Gordon Hayward’s exit make the team worse this season? Yeah, it could. But what if his departure really does transition to addition by subtraction, allowing Tatum, Brown and even Smart to take another step forward?

After all, a five-man lineup of Walker-Smart-Brown-Tatum-Thompson with Teague and center Daniel Theis coming off the bench should make for a strong rotation come playoff time.

Admittedly, that grouping could be aided even more, though. And there’s two different ways in which the Celtics could do it.

First, the C’s could find a way to use the trade exception they received in the Hayward sign-and-trade with the Charlotte Hornets. Ainge recently explained how the Celtics aren’t in a rush to use said exception, but that could be a different story ahead of the NBA’s trade deadline if (and when) Boston shows it’s among the best teams in the Eastern Conference.

There’s another way, too. And while it may be a shot in the dark, it’s not unprecedented and should not be asking too much. If Boston could have one young player between Romeo Langford, Aaron Nesmith or Payton Pritchard rise to the occasion and make an impact in their first or second year, it could really make for a crucial depth piece. Langford showed glimpses during his rookie season while first-rounders Nesmith and Pritchard were drafted largely because of their ability to shoot. That’s something the Celtics are in dire need of, a player to space the floor for Tatum and Brown. It’s time for Ainge’s middle-of-the-road draft picks to start paying off.

Obviously, even with that said, it’s not going to be easy. The defending Eastern Conference champion Miami Heat bring back the core of Jimmy Butler-Bam Adebayo-Tyler Herro. The Milwaukee Bucks added guard Jrue Holiday to an already impressive twosome of Giannis Antetokounmpo and Khris Middleton. Then there’s the could-be-very-good-or-could-be-very-bad Brooklyn Nets headlined by Kyrie Irving and Kevin Durant, and now even Russell Westbrook’s arrival in Washington. It’s not a conference featuring just LeBron James and then everyone else like it used to be.

The East has depth this year. There’s no doubt about it.

But the Celtics have the talent, and that’s what makes them a contender for the NBA Finals. 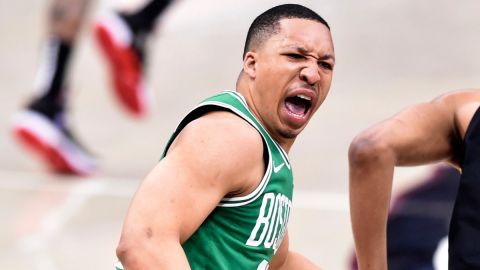